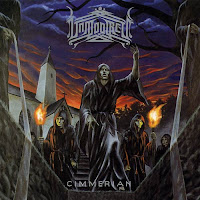 It's almost too funny that the opening track on the Unmoored debut album is called "Trendmade Bitch", because it sounds quite like the initial death & roll offerings of bands like Entombed and Desultory, with a verse riff pretty close to "Eyemaster". That's not at all what I was expected when I saw the cover art, and might surprise fans who have only been exposed to their later, far greater album Indefinite Soul-Extension, but that's what we're getting here. To be fair though, Cimmerian was released a few years after its recording, and the band had roots in Gothic metal, so such a sound evolving here is a natural course, one that they would eventually develop into something superior.

The death & roll comparisons continue with "Now and Forever", which uses simple, grooving hooks until it can develop a moody, Gothic metal chorus in the bridge. I'm not adverse to the latter, but the getting there can be a little dull. Suddenly, "Down at Zero" explodes, faster and glazed with desperate, effective melodies, and offers some hope that the album might yet have some kick to it. "Blood By Tragedy" is a mess of clean chorus parts and unfortunate Korn or Godsmack-like schizoid chugs in the bridge, though there are a few decent riffs tucked in, and "Here Today, Gone Tomorrow" has a guitar part pretty similar to Metallica's "Shortest Straw" fueled by thick Entombed death-punk and a pretty bad breakdown groove riff. "Warsong" and "Solution 45" are entirely skippable, and "Final State" sees the band reverting entirely back to their early Goth roots, a morose piece with manly clean vocals, similar to Cemetery or Type O Negative, only bad...

It's not worth dwelling too hard on this album, because Christian Ävestam would go on to better things for himself in Incapacity, Miseration, Scar Symmetry, and Unmoored itself, but I'm not going to lie, it's a little lame even for a debut. There are very few riffs outside of "Down at Zero" that warrant attention, and the styles clash too openly here, as if Unmoored is not yet sure of itself and its direction. The mix is fairly weak for a Sunlight Studios job with Tomas Skosgberg, and the clean vocals are often embarrassing. Where it rocks & rolls, it fails to live up to the Entombed model. Sure, that band was starting to release some regretful material themselves by this time, but at least kick our butts like Wolverine Blues did. Instead, the album seems to revel in its own mediocrity, on a clearance rack somewhere between the melodeath explosion, death & roll meltdown, and Swedish Goth metal phenomena.