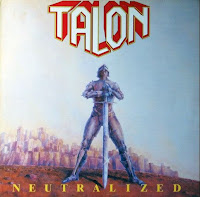 Talon whimpered onto a German scene in which they could damn well have exploded, given ideal circumstances, because they were a fairly solid entry into the field of melodic heavy/speed metal. Clearly drawing on the inspiration of NWOBHM acts (Raven, Judas Priest) and their countrymen Accept and the Scorpions, they possessed the hooks and the 'looks' to run in the circles of early Running Wild, Avenger, Sinner and Samain, but for some inexplicable reason they just never caught on, and now belong only in the province of treasure seekers and record collectors on and offline. Neutralized was their first and best offering, with a pretty potent slew of songs that balanced great guitar work and enthusiastic energy.

It starts off extremely strong, with the mighty mid pace gait of "Hatred Grows Slowly", huge Accept chords glistened with streaks of spry melody, as the bass pumps below and Peter Hader's resonant, accented vocals. Some might find it hard to get past the 'hand clap' in the chorus, but the chord pattern reminds me a lot of Running Wild, and I enjoy guitar riff in the bridge also. "Neutralized" picks up to speed metal territory, and this is probably one of the best on the album, with it's John Gallagher-like screaming and incendiary bridge melodies that hook you straight into that phenomenal mid-80s German bliss. These are joined the weighted hard rock of "Victims of Suicide", driving hesher force of "Backlash" and "To the Bitter Dregs", and two late bloomers "Hotter Than a 1000 Suns" and "Gale Warnings", for a fairly strong selection.

The album does have its weakness in the throwaway ballad "Time Could Not Heal", but there are also a pair of tracks here that remind me of Avenger (and Rage) that are quite good: "Overlords Supreme" and "Preacher of Evil", so overall, its almost completely consistent and enjoyable. The production here is airy and 80s, with the vocals loud and proud, but it still sounds good if you're accustomed to the period. The potential of the band was pretty obvious, though most of the songs don't quite compete with the band's peers. Talon could easily have drawn some appeal from the more commercial hard rock oriented scene that adored Scorpions or Bonfire, but they had heavier chops that compare more favorably to Zed Yago, and especially the band Samain, who had an even more limited career but were slightly superior to this.