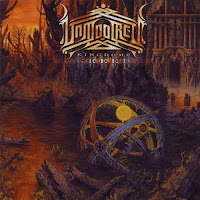 If the cover to Unmoored's sophomore album Kingdoms of Greed seems familiar to you, that's because it's an inversion of Seagrave's cover for the Pestilence compilation Mind Reflections, which had already come out some years before. Sort of a strange choice, but there's at least an alternate, simpler cover, since someone else obviously made the connection. As for the music itself, it's a quite enormous step above Cimmerian in quality, but that step comes at the expense of an almost complete shift in tone and style to an aggressive strain of melodic death metal which is more At the Gates than a sodden impression of Entombed death & roll with melodies and Gothic bits sprinkled over the frosting.

Kingdoms of Greed comes firing out of the gates after a brief Poltergeist sample, with a wall of grinding force called "Feral Blaze". This essentially sounds like Slaughter of the Soul-era At the Gates material with a slightly grinding edge to it, and less memorable riffs. Still, it decimates the entire debut album in about 3.5 minutes, and it's followed by the even more impressive, scathing "Tellurian Crown", which carves out glorious melodies and technical, furious guitars into a grim mountain of force. Some of the clean vocals and rock grooves do creep their way back into this, but they're plotted out better in the song. "Self-Invoked" returns to the sheer ass-kicking of the first track, and "Torchbearer" even commits elements of melodic black metal to an ambitions 7 minutes which never really feels boring. "Milestone" and "Thrown Off the Scent" are both tight melodic death tunes, and there are also a pair of interesting breaks in the action, the tonal, progressive ballad "Final State Part II" which sounds like a poor man's Queensryche, and the more impressive, folksy medieval grace of "In the Dark Midst of Winter".

Christian Ävestam proves here that's he's so stuffed with talent that it's flowing out his ears, and even if Kingdoms of Greed is not perfect, and not Unmoored's finest hour, that extra effort is appreciated here. Some will probably argue that he was just jumping on the bandwagon of At the Gates, Eucharist and so forth, but clearly there is still enough of the personality he wanted to project upon the debut album Cimmerian, only here it's done right. I could skip the first of the ballad pieces, and a few of the songs don't measure up to others, but in all, this is an effective and cohesive assault of aggressive death that creates an immediate 180 in potential, and might thrill any who seek out the more obscure melodic death works of the late 90s.