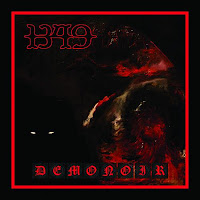 Whether it suffered from the symptoms of crass experimentation, utter laziness or the disinterested filling out of a record contract, 1349's prior album Revelations of the Black Flame was a sorely received disappointment, and for a good reason: it fell on its face very swiftly, a myopic miasma of ennui that was nowhere near as creative or interesting as its creators might have wished. In fact, I believe it was the single biggest disappointment of last year, hurling the band from the heights they achieved with their initial trilogy of surging, blast off epics into the latrine of despair. The early buzz on its follow-up, Demonoir, was that the album would be some grand return to form, some compensation or dispensation of that numbing atrocity.

I'd be lying to say that this is successful in any such venture, because for much of its playtime, Demonoir is nearly as jaded and disposable as its predecessor. Of the 13 tracks, more than half are intro and interlude pieces, ranging from about :40 to 4 minutes, known as the "Tunnel of Set" sequence. I have no adversity to such a tactic, of course, many great albums have mixed shorter segues with the meat of the metal. Unfortunately, most of these pieces are outright worthless ambient excrement that doesn't even thrill from a haunting angle. The only exceptions would be "Tunnel of Set III", an acoustic dusting that seems as if it might develop something interesting if it weren't cleaved off by "Psalm 777". The closer, "Tunnel of Set VII" is perhaps the best of the ambient filler, with some distant, brooding tones that slightly titillate.

So the 'meat' itself consists of only six tracks, and these are of greatly varying quality. "Atomic Chapel" plods along, a writhing serpent of melodic sheen that devolves into the pandering gait of blasphemy and atmosphere. I like the use of pianos in the bridge, and the riffs do build up to the thundered pace of older albums, but the configurations of notes are rarely effective. "When I Was Flesh" and "Psalm 777" are more direct returns to the band's climactic past, with bombastic structures that channel filth and hostility, but of these, I could count only a few worthwhile riffs, like the choppy, late bridge of "Psalm 777" which swerves into a razor-like discourse. The next track, "Pandemonium War Bells", is honestly pretty good, with a mystical and arabesque motif accumulation that engages the attention. This is maintained through "The Devil of the Desert", but it sadly transforms back into sodding, forgettable and typical blasting. "Demonoir" functions due to its grooving and atmosphere, but it quickly evaporates from the memory despite the rampant howling of the climax.

Demonoir is unquestionably superior to Revelations of the Black Flame, because to some extent, the band's manic energies have once again asserted themselves. It still favors that grimy encrusted production, a much more raw and organic mix than the band have used in the past, which often serves the compositional elements. However, where the album does manage to bore itself into your conscience with its tendrils of despotic savagery, it simply fails to strike the balance of ripping guitars and unchecked aggression of Beyond the Apocalypse or Hellfire. This is an average offering from a collective of individuals capable of so much more, and no amount of conceptual tinkering, lyrical snap (the lyrics are admittedly quite good) or guest musicians can save it from the abyss it so stridently lauds.