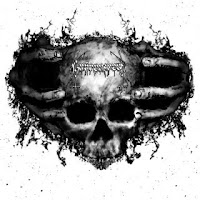 A few years have passed since Death Born, the sophomore outing of Germans Gräfenstein, which I'm honored to say kicked my ass through a floor after braining me with a bullet belt and firing a nail gun into my ears. Fast, frenzied, aggressive black/thrash metal with the fresh scent of carrion upon its cutting winds. It's a style we tend to associate with the Swedish and Norse bands, like a Nifelheim, Bewitched, or Aura Noir, but these three take a mildly different approach to the hybrid. They're essentially black metal first and foremost, unopposed to the use of razor-like, climactic melodies, but they manifest the thrashing side simple through the percussive nature in some of the guitar riffs. Think Immortal jamming out to the earlier Bathory and Kreator catalogs, and you've got Gräfenstein in a nutshell.

Skull Baptism shows no sign of the band's joints locking, or slowing down with any age. It's not quite so punishing as its predecessors, but it compensates with a vicious clarity of production, and sawblade rhythms that blast and bite through cold, whipping winds of torment. "Essence of Chaos" and "Inhale Nonentity" provide raucous bursts of nuclear, thickly endowed black metal, while deeper in the band teases us with straight thrash riffs in "Dead End" or "Monarch of Scorn", before blasting us all straight in the face. The finale, "Icon of Sin" goes a little further before it too accelerates into a Northern tempest, and "Acherontic Temple" sears with Dark Funeral-like consistency as frightening daemon energies manifest through the blood stream of the guitar. Drummer Ulvernost is quite insane, but thankfully the band have seen fit to let his percussion breathe into the mix, so it almost feels like a live performance.

If Skull Baptism has a flaw, it's that they've done this before, and better. Death Born indulged in a more potent primacy, its riffs bewitching and intense, while this new record trades off a little of the turmoil for aural depth. Along the way, the riffs have not necessarily improved, and unless you feel in the mood for some cold, ripping darkness ala Mayhem or 1349 with a few thrash riffs thrown in, there's not much to blow your mind. The hate and fire are still strong within Gräfenstein, and they're talented for a trio, but despite an added layer of atmosphere, I did not come away from this as harmed and bloodied as 2007. Sure, the record cuts, and there's nothing really negative to say about it, but the wounds do seem to dry up sooner than I'd like. At any rate, there remain things to enjoy in this skeletal triage, from Greifenor's straight razor rasp to the empowered rhythm section, sadistic ideals and dire mood.