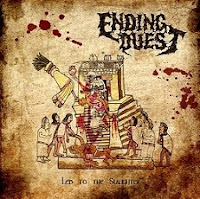 Ending Quest is another young Swedish project performing straight up old school death metal, a further vehicle for Stefan Nordström of Desolator. Like that band, this Led to the Slaughter demo is unflinchingly old school and not afraid to flex its familiar muscles, but there are a few differences of note. Where Desolator worked within a miasma of rugged, early 90s aesthetics, Ending Quest feels a little closer to a hybrid of the old, crushing tones of Entombed, Therion, Unleashed and Grave, and the Florida legends Death, at least on their albums Scream Bloody Gore and Leprosy. Toss in some Pestilence and Asphyx for good measure, and you're off to a worthy start.

The production here is also quite an improvement over the Desolator demo, and it almost feels like someone were recording Leprosy or Consuming Impulse with the highly recognized and cloned Swedish guitar tone of the master. No, there are not riffs here of the caliber once conjured by a Patrick Mameli or Chuck Schuldiner, but in all, tracks like "Life Recedes" and "Master Therion's Reign" are fun despite this oversight, if only because of their thick, raucous delivery. It's not until the title track that you get a pretty damn excellent guitar riff, and "A Fiery Fate" is another clear winner, with an eerie opening guitar melody and strong body of pulverizing, dynamic force. "Body of Christ" moves with the same momentum as some of the earlier tracks, with a half-baked breakdown into which creeps another spooky guitar line.

Ending Quest has also included a cover of "Wolverine Blues" from Entombed, sort of surprising since you'd think there would be more interest in something off Left Hand Path or Clandestine. It's not a huge leap from the original, and perhaps too close to warrant attention, but it's harmless to show that the band have the chops to tackle their influences head on. In the end, I found that all five of the original tracks had something to offer, and while they are far from unique, they're fun enough examples of the style that they might very well be snapped up in the feeding frenzy for the old Swedish sound. Obviously, I'd like to hear this entire scene produce something more novel, and perhaps such an evolution is not long around the corner, but if you are seeking only the nostalgia for the death metal of your childhood, or you're just getting into this stuff for the first time, you might add Ending Quest to your list.