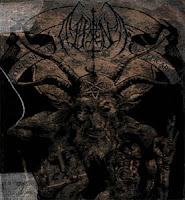 Compendium Melificarum is the sort of compilation we should all stand behind, nothing more than an artist's complete body of early demo work gathered in a single location for the convenience and ease of a fan interested in such primacy. Granted, there is nothing 'easy' or convenient about Ill Omen's sound: a one man (IV), disgustingly distant black metal project that strikes several nerves with its unabashed approach to slicing aggression, but the completeness is a compelling factor, as is the morbid folio appeal of its digipak exterior, both ominous and gauze taped to create an organic, fibrous, evil effect, cryptic and memorable sigils gracing the rear and interior panels.

Thus the cover of the Compendium Melificarum warns you of its impending delve into obscurity, and on that front, Ill Omen delivers, through the incorporation of its three 2009 demos (excluding only the more recent Spear of Salvation). Ill Omen itself is the sort of primordial, hissing black metal that many will either love or hate, so true to its genre but absolutely void of any semblance of productive evolution. Just haunting, unforgiving, relentless material that cuts like sharp steel over steady percussion, lightly swerving basslines and the vaguely syllabic shadow of the rasped vocals. Here I most enjoyed the breathless abandon of "Crimson Temples", and "Tenebrous", but the dark ambient piece "Black Moon Harrow" and swelling feedback of "Three Suns" make for a reasonable complement.

Black Esoterica does not offer a change in direction, however I did find the black metal material to be of a general increase in quality, as the guitars produce a deeper resonance in the title track or doom-like monolith of "Burning Stars". These are joined by three ambient pieces, and IV is seasoned enough at a manifest of such terror, with "The Serpent/The Eye" and "Chants of the Darkened Sceptre" taking preference over the more sparse "Scribes of the Unlight". One might presume that Ill Omen would step up the actual mixing standards of this demo, but that is not the case, and this is even more raucous and noisy by comparison to the first. However, the third demo Adverse Order does ramp up its sonic correlation to the listener, and also offers the cleanest and perhaps most interesting of compositions in the lengthy, 9-minute "Harvest" or crushing "Revelations of Suffering and Flesh". This, too, has a number of ambient segments, like the tonal "Ruptured Earth Ablaze" or the dire sheen of "Adverse Order" itself with its down-pitched, obscure narration.

Obviously, if you're a fan of Ill Omen, this would be essential, since it's almost the entire discography in one place, and likely the first time any will hear of his work. As far as the actual, compositional skill, that's not really the forte here. IV is more concerned with a grimy, abhorrent atmosphere which holds appeal mostly to fans that prefer the traditional torments of Burzum or Darkthrone circa 1991-1993. All three demos will scare the shit out of you under the right circumstances, as they swell with malicious environments and an utter disregard for comfort, but they don't really attract based on their musical virtue alone, so proceed with caution if this is not your cup of tea.