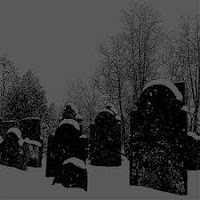 Frostscald Records and Silenced Voice Recordings continue their relationship with the Finnish black masters Horna, releasing a series of obscure or hard to find material back into the waiting clutches of their expanding audience. A noble pursuit indeed for a ghastly and ignoble gaggle of musical artists whose intent is to bury us in the sounds of wintry discontent, suicidal madness and carnal traditions, all in steady supply through their split with the arguably even more desolate French act Sacrificia Mortuorum. Originally released in 2006, this cult recording has been packaged once more with its bleakly appropriate cover image, a graying graveyard that rests beneath the weeping of snow, and both the Finnish and French lyrics are included for interpretation.

Horna's contributions are exclusive to this release, a pair of 9-10 minute epics that continue in the tradition of their then-current full-lengths Envaatnags Eflos Solf Esgantaavne and Ääniä Yössä, albeit with a mildly more even production. "Kurjuus" is a glorious and unhallowed romp through sickening waves of chaos and melody that remain blasting and intense for several moments before the pace of the song is measured out into a mid-paced, depressive partition, a structure that is rinsed and repeated even though the actual riffs shift into different patterns. "Kouristukset Kylmässä" is nearly as punishing, with ripping ice wind melodies that support the frantic rasp of Corvus, pumping bass and steadily crashing drums. As with so much of their work, one must immediately dispense with any expectations of novelty: Horna are perhaps the very definition of traditional Finnish black metal, influenced directly through their Northern neighbors Burzum, Mayhem, Darkthrone, and Bathory, and though neither of these songs could be defined as 'exceptional', both evoke their reliable virtues of slaughter and immersion.

Sacrificia Mortuorum are an excellent match for the Finnish mainstays, and as I hinted, their spacious seductions of fiendish diaspora seem even more chill and distant, like bloodied and desperate men about to bleed out into the unforgiving winter winds. Three tracks are offered, also exclusive here (thus fans of either band have a good excuse to heap their coins upon it), beginning with the rampant 8 minute "Déchu", another repetitious onslaught in excess, with the standard blasting skills and razorsaw guitar tones that define this 'raw' extreme of the black metal spectrum. "L'Appel Du Sang" is about the same length, but opens with a dire and deadly riff that slowly cedes into the bloodstream guitars and heraldic nightmare sneers of the vocalist Lord Arawn. Their final showcase "Emergence D'une Nouvelle Ere" is about half this length, and instrumental, with the tinny cymbals and thriving, snowstorm riffs taking center stage.

Though they might inhabit separate borders, the music of these two comrades is such that they develop a hoary, fluid synchronicity that never once allows the listener to escape the dominant cold of their compositions. Neither band comes up with truly engaging riffs on this split, and both have come up with superior work elsewhere, but it might be excusable for those seeking an untainted excursion into darkness and winter, the near 40 minutes of material serving only as some empty insurrection to discomfort the cold and waning heart. This is all standard, raw black metal akin to Burzum's earlier body of work, or perhaps Russia's Branikald, and it knows its audience well. Newcomers to the artists would find a better yield in Sacrificia Mortuorum's 2007 sophomore Maturum Est, or almost any of Horna's full-length efforts, but as a collector's item, it at least offers material that you won't find elsewhere, even if it is borne more of sadistic atmosphere than an engaging compositional quality.