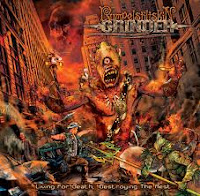 Buried in the Front Yard, the debut from Pennsylvanian thrash oddity Rumpelstiltskin Grinder, probably reaped in a little more credit and hype than it deserved, but keep in mind that the star of thrash metal was rising once more, and as Relapse's official entrant to the dance, they were offering something slightly more unusual and palatable than their emergent peers. Granted, I was no huge fan of this debut, I found it uneven and all too easy to forget in short order, but clearly the band had some talent submerged beyond their fairy tale facade, and Living for Death, Destroying the Rest grabs the spearhead of potential and thrusts it like a cantankerous phallus into the face and ears of the disbeliever.

Essentially, this sophomore takes all of the elements of the debut and escalates them to a denser, fibrous platform which hits a lot harder than the reservations of that predecessor. The traces of metalcore/thrash that were hinted at there are expanded with bigger riffs and more forceful ministrations like "Nothing Defeats the Skull", "Fiends in the Mountain, Ghouls in the Valley" or "Traitor's Blood", which dominate bands like Shadows Fall, God Forbid and Lamb of God at their own game, with far superior technical musicianship and fetching guitar riffs aplomb. It's unusual to have such a 'tough guy' aesthetic pounding in a tongue tie with such an airy penchant for melody, but against all odds, the Pennsylvanians make it function. What's more, you've got a few tracks like the acrobatic "Spyborg", and the more driven, deathlike taint of the "Dethroning the Tyrant" trilogy that seals off the album (especially "Sewers of Doom", which are genuinely engaging and interesting.

I'm not sure that Living For Death, Destroying the Rest is necessarily a 'good' album, but having no expectations whatsoever, it was a pleasant improvement over the first in almost every single category. Better leads, better riffs, and a superior production mark for a more intense listening experience, and the album only rarely feels overly 'silly' (the unneeded crossover anthem "Beware the Thrash Brigade" being a noted exception). The quality of the tracks is quite uneven, and I wish there had been more with the caliber of writing found on "Spyborg" or "Sewers of Doom", but overall even the worst of the bunch are comparable or slightly better than what the band were writing years before this, so there is indisputably an upwards evolution here that might one day bear some truly tasteful fruit.