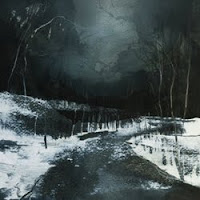 2006's Ashes Against the Grain nearly lost me. After being a huge fan of The Mantle and their previous efforts the new direction was off-putting for me, and I couldn't help but scratch my head. In 2008 they released The White EP and it was a curious but fantastic offering, though it was noted this was not in fact indicative of the band's main direction. It was a branching path off the main highway of their LPs, heavily acoustic and featuring several samples of the 1973 film The Wicker Man and a song taking lyrics from A.S.J. Tessimond's "Birch Tree."
After a sorrowful cello intro (Jackie Perez Gratz guesting, also lends a hand in "To Drown") to the sound of rain there is a thundering of drums and, lo, black metal! "Into the Painted Grey" kicks off with the band going full bore, then losing the drums and then slowly building back up to the first vocal passage. Haughm's vocals remain virtually unchanged thusfar, though this time there is a noticeable increase in energy right off the bat. Perhaps not enough to sway those that think Agalloch is the epitome of boring, treehugging excess, but an interesting change nonetheless. Their acoustic touches remain amongst the guitarwork, welcome after Ashes Against the Grain's focus otherwise, an experiment perhaps not suited for a band such as Agalloch. At least, not yet. There is a glorious interlude halfway through the aforementioned song, tribal drums and some simple yet lovely guitar work. The whole song is dark and yet possessing a hopeful quality, aural shafts of sunlight through storm clouds.
"The Watcher's Monolith" continues down their well-worn natural/spiritual black metal avenue, with folksy brushstrokes throughout, familiar but well done nonetheless. "Black Lake Nidstång" begins with crickets and other sounds of the night and more mournful sounds, though this time piano. Briefly, as if concluding the story of the previous song. Whispered vocals showcase the typical Agalloch songwriting, solid, befitting the music with their epic and sad tales. Though it is apparently not a guest singer, but there is a vocal section just after seven minutes in the song that impresses me with John Haughm's versatility. It is a yell positively dripping with emotion, the true definition of a 'cry', and text cannot do it justice. Nathan Carson of Witch Mountain lends his talents to a very cool extended synth interlude within the song. "Black Lake Nidstång" is easily the best track on the album and one of Agalloch's best.
I am torn when rating this album because I absolutely love it. It is refreshing, extremely satisfying, and intoxicating like a good beer. However, despite the steps more away from atmospheric folk and into metal to some degree, that folk quality is still there and inevitably will not resonate with some. If you are willing to give it a chance, by all means, do it. For those that are fans you are definitely in for a treat.
Verdict: Epic Win [9/10]
http://www.agalloch.org/
Posted by JD at 11:40 PM