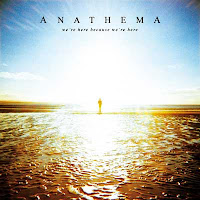 In this day, Anathema have so far removed themselves from the epic doom of their waking years that any comparison of the two poles will come up empty. However, they've been painting the trace colors of their current formula for a great many strokes, since The Silent Enigma and Eternity in the mid 90s. Alongside a handful of other acts (Katatonia and Tiamat come to mind) their numerous evolutionary lunges have been largely successful, first courting Gothic metal and now this atmospheric rock era. While some neanderthal within me hangs on to its club and wishes to bludgeon the damn band every time they issue another of these lush, artsy, emotional excursions, I simply cannot bring the bludgeon to bear, because they're just too qualified to ignore.

The vapidly named We're Here Because We're Here does not do much to argue their case, but then, this is the sort of emotionally uplifting piece of work to which such a title is rightfully affixed. Channels of soft and progressive rock fuse through these compositions, almost like a dreamier, unreal alternative to Denmark's fabulous Mew in the escalating "Thin Air" and "A Simple Mistake", the latter trampling somewhat close to the heavier mystique of their past. The delicious mix of Cavanagh and Douglas vocals are so well managed, so evenly distributed that they mesh straight into the instrumentation as if they were a pair of flitting moths across the strings, drum skins and piano keys. It's nearly impossible to find "Angels Walk Among Us" or "Dreaming" anything but soothing, despite the fact that they're the same melodic stock that you'd hear polluting the closing credits of The Hills. Naturally, I'm more predisposed to the measured power of "Everything" or the epic Floydian rhythms of "Universal" and "Hindsight", but there are few tracks that trail below the margin of effectiveness.

Anathema have long been masters of their own destiny, and thus this 8th album benefits from top notch production values that do nothing but honor the compositions, both in their plentiful calms and occasional surges into busier bliss. There's a guest spot on "Angels Walk Among Us" courtesy of Gothic rock crooner Ville Valo (H.I.M.), but thankfully he's reserved here, so don't expect any blathering about fishnets and heartagrams. Of the full hour of music here, there were certainly a few null moments where the momentum of the writing did nothing more than support the framework of tranquil light permeating the album, but I felt more affected by this than the previous albums A Natural Disaster or A Fine Day to Exit, and that's saying something. The doom emigrants might not yet have what it takes to craft truly catchy bits that will thrust them into the mainstream rock portfolio of a Muse or Oasis, but their decidedly subtle approach should win them accolades in the appropriate press. I'll probably forget this album in a short period of time, but I can't deny that it's breathtaking in the interim.