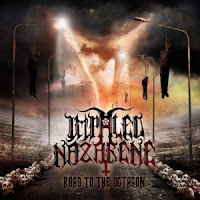 Impaled Nazarene might not release works of unchecked, viral and raw brilliance anymore like a Latex Cult, but they've kept with the times rather avidly, never once sacrificing their extremity and nuclear party attitude through their studio evolution and improved musicianship. Road to the Octagon is the band's 11th full-length offering, and the Finns once again remind us that black metal need not be bloated or pretentious to be effective, straddling the snortable white line between serious lyrics and execution, and fare of a lighter, punkish 'fun' nature (i.e. the continued legacy of the goat), with a similar, hi-octane thrash aesthetic that permeated their past few albums like Manifest and Pro Patria Finlandia.

As expected, this experience is not the usual stabbing in the wintry woods, staring in pain as the blood pools out into the snow and icicles form along the lacerations, but rather a band of mutant reavers pounding your skull into fragments on the pavement as their leather and spikes glitter in the fallout of a world gone mad. Velocity is the weapon of choice, and tracks like "Enlightenment Process", "Tentacles of the Octagon" and "Convulsing Uncontrollably" all burst past the listener in rarely more than 2 minutes time. There are a few swerves in the formula, like the blistering death metal riff that inaugurates "Reflect On This", or the further dynamics of the album's 'epic' finale "Rhetoric Infernal" (epic only that it's over 4 minutes long...) which actually breaks for a slower rhythm in the bridge, but for almost the entirely of the 13 tracks and 33 minutes, you're being repeatedly flogged at rapid tempos.

That is what Impaled Nazarene excel at, and on Road to the Octagon, they do it with more fervor than we've heard in years, not to mention one of the best mixing shine jobs of their career. As voracious and vorpal as the band's writing remains, the better production here is a huge leap over the band's 90s efforts, and though it might not be cited for the same smutty novelty the band were then associated for against all odds, it's a ripping good time for a half hour spent on the dragway burning rubber, or at the dumpster passing your liquid lunch. Whipping guitar rhythms channel thrash, punk and heavy metal influences into the characteristic snarl of Mika's blasphemous binging, and the rhythm section storm along like twins born of opiate lightning. No compromise, no compositional evolution, and if you think the band are slowing down as their limbs experience the continued incursions of gravity and cell death, well...first you'll have to catch them.

Posted by autothrall at 7:15 AM