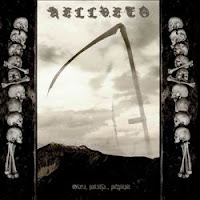 Concluding a trilogy of works that debuted with last year's excellent Od Południa na Północ.., and continued through the similar, slightly less impressive Kry, Poland's one-man epic audio force, L.O.N. has now arrived with Wiara, nadzieja..., potepienie (faith, hope, damnation). Another foray into wild, majestic overtures that operates on much the same principles as its direct predecessors. Thus, you will hear swelling keyboard symphonies, acoustic guitars, metal riffs and a variety of raw, rasping vocals and narrative outcries in conjunction, with his unique sense for composition, all cast in the expansive and echoing, low fidelity production atmosphere he is known for.

It's a joyous but morose saga, each piece the herald of a new, obscure glory, dramatized as if a play upon the stage of history. "Gdy ogien u bram zaplonal" features flights of descending, acoustic guitar passages above grooving, programmed percussion, breaking for brief segues of deep, distant chants and brooding ambient tones. The title track functions on a more direct, charging aesthetic, blasted beats lightly supporting the rising textures of the piano, and the slightly audible guitar riffing, into voluminous magnificence. "Od zachodu na wschod" thrashes along desperately atop steady rhythm, tremolo picking patterns and stilted choirs. "Jam glosem niemych" creates a dire, mourning mood that for at least the intro, stands apart from most of the Hellveto material of the past few years. "Swit zalamania" is perhaps the most cohesive and breathtaking piece on the album, filling out its 7:30 playtime with ardor.

In order to celebrate the conclusion of this saga, L.O.N. has included a bonus disc with three 20+ minute tracks, each of which celebrates the title track of the corresponding release with a massively inflated remix featuring new music. Of these, the "Od poludnia na polnoc" obviously holds my attention the most, as it hails from my favorite of the albums, but all three are a welcome addition that bolsters the overall value of this release. In fact, this second disc is even longer than the first (almost 70 minutes). Combined, you can't really turn this down if you're into this most noble of Hellveto eras, though I do feel the sounds and techniques used here were already mastered on the first effort in the trilogy, and thus there can seem a redundancy (as there was with Kry, but the new material here is slightly stronger). Still, I'm assuming he's wrapped up this phase of his existence, and we should look forward to newer style the next time around.