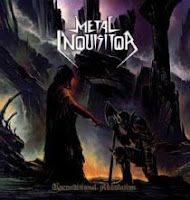 Germans Metal Inquisitor have been sticking to their guns now for about 12 years, exploring the roots of heavy metal with a heavy emphasis on classic British sounds like Saxon and Iron Maiden, and Unconditional Absolution sees refinement in both their writing and production values, so it's not a stretch to imagine that they've reached a new career height, surpassing the quality of The Apparition and Doomsday for the Heretic before the smoke has cleared off the first few tracks. Where so many younger bands are attempting to imbue manic vigor and ironic screaming into their 80s worship, these men sound like they not only actually lived it, but approach an album in 2010 much like their idols would, without any of the brash arrogance off or silly self-referential indulgence.

"Extinction" begins with steady rock fluency, giant shimmering AC/DC chords thrust into a Judas Priest verse, solid below the consistent delivery of El Rojo's distinct style. He's basically like a pastiche of various NWOBHM singers with a slight accent, never really scaling the heights to a screeching rage, but keeping the vocals smooth. "Casualty Evacuation" maintains the pace with busier riffing, and I truly enjoyed the bridge chords here, bluesy, hard rocking and well fit to Rojo's howling. They follow with what hints at balladry but soon erupts into another classic riff, "Quest for Vengeance", which sounds like the love child of Iron Maiden, Saxon and Riot (yes, a tryst!) But the best is yet to come, in "Betrayed Battalion", an angrier, powerful number that emits all the crunch and force of David Wayne's work in Metal Church/Reverend, or perhaps Sanctuary sans the Warrel Dane screaming. "Satan's Host", "The Arch Villain" and the fun "Persuader" are also a hoot, and "Suffer the Heretic to Burn" kicks the ass of almost anything else on the entire record (aside from "Betrayed Battalion").

I'm not sure that Unconditional Absolution creates the constituent, legendary moments of many of the band's influences through the chorus sections, but if you're a purist, you're very unlikely to care, you'll be so satisfied that a band like this honors where it came from without the needless stupidity of so many 'retro' acts. If you're into the more recent, quality effort by Accept or Saxon, or perhaps the better solo records from Bruce Dickinson or Halford, then you are exactly the sort of market that this will appeal to. Good hooks, great sound, and sincerity really add up here, and hopefully this will broach the broader audience than the 30 and 40 something record collectors who were partial to their previous albums. What I'm saying is, throw away the White Wizzard CD you've been fingering at the record shop, and pick this up instead, if you can find it.