Sabbat - Dreamweaver (Reflections of Our Yesterdays) (1989) 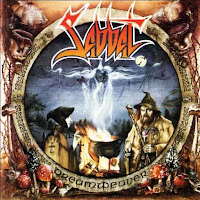 England's Sabbat were a band I was very positive were going to conquer the entire fucking planet, so promising was their scathing 1988 debut History of a Time to Come. But in truth, I had developed a connection to them before this, since they released their 7-inch "Blood for the Blood God" flexi-disc in White Dwarf magazine. The band's amazing ability to offer libations to a fictional war gaming deity created an instant attraction, not to mention the song itself kicked some serious ass, a delicious and atmospheric example of 80s black/thrash metal that displayed infinite writing potential and a malicious attitude so uncanny among other extreme metal acts of its day.

As it turns out, neither of these would prove to be the creative peak for the bastards, because their 1989 sophomore effort Dreamweaver (Reflections of Our Yesterdays) somehow managed to trump them all. A concept based on a psychological study: The Way of Wyrd: Tales of An Anglo-Saxon Sorcerer, it further heralded Sabbat's excursion into paganism and witchcraft, without sacrificing their sadistic mockery of the Church and all its hypocrisy. Such was the wit and intelligence of Martin Walkyier, that in just two albums, his band had transformed into something so much more interesting and unique than what nearly any other thrash band in the period were exploring (Voivod the one possible exception). Heady, brilliant and damn near perfect, Dreamweaver has justifiably become a classic in the field, a veritable whirlwind of riffing fortitude, menacing atmosphere and whip-like, devilish, unique vocals.

Those who had exposure to History of a Time to Come were probably not surprised when the bells, crows, wind and spoken narrative of "The Beginning of the End" intro paved the way for "The Clerical Conspiracy", perhaps the ultimate clarion call to warfare for pagan purists and black magicians in all of thrash, an awakening against the follies of the Church. The guitars were not only rapid, belligerent and darkly majestic, but a comfort to the band's existing fanbase: Sabbat hadn't changed much, they'd merely improved. The pace is immediately broken by "Advent of Insanity" (one of the first songs I ever brought to my guitar instructor to learn!), an acoustic piece set against the creaking of broken hulls on some grim shore, Walkyier proving he can sing with as much skill in a cleaner range as his snarling, a precursor to his more enduring and successful career with Skyclad. This track might not be the thrash we are accustomed to, but it's perfect in every way, a somber violin haunting against the backdrop.

A sad lament for travellers held in the hand of fate,
Your future stands upon the prow, your past drowns in the wake.
What chance is there for sanity, when madness takes the helm,
And steers you on a downward spiral to his lonely realm?

Then it's back to business as usual, within the imminent hostility of the next cut: "Do Dark Horses Dream of Nightmares?" The guitars here are both playful and severe, Walkyier taunting you as if he were suddenly possessed by a host of deviant characters (similar to several tracks on the debut), Sneap's riffing blazing back and forth across the frets like a plague of angels warring across land and sky. "The Best of Enemies" features a killer spoken fix before a carousel of twisted guitars bounce along to Simon Negus' thundering groundwork, melodies soon elevating into the fell glory of a thrashing vanguard. "How Have the Mighty Fallen?", the longest piece on the album, an epic monstrosity that cycles between mid-paced neck breaking volition and blitz bombing acceleration, with an extended bridge breakdown that makes you want to club the nearest cleric or authority into paste, and one of the finer solos Sneap has ever put to record.

"Wildfire" is a personal favorite, launched with a paranoid sheen of broken melody that Walkyier himself leads into the descending guitar cascade over the first half of the double-bass driven verse, all leading to the predictable but amazing chorus at about 1:20. "Mythistory" opens with sauntering bass and a majestic arch of melody similar to what Testament were writing around this time, then progressing through an amazing double harmony over the warlike footwork, and the predictable, final charge into the conflagration of Martin's threatening poetry. The guitar fill at 1:30 is simply genius, scattering the listener with the wind, and riff for riff, it proves one of the most taxing and dynamically satisfying tracks here. Another delicious acoustic piece closes the album, though this time it's an instrumental, "Happy Never After". If you've got the re-issue, though, you'll have a trio of added live tracks: "The Clerical Conspiracy", "Do Dark Horses Dream of Nightmares?", and "The Best of Enemies", all recorded in East Berlin (different tracks than you'll hear on the Doomsday News III: Thrashing East Live compilation, but all appeared on The End of the Beginning video.

There is one thing that holds Dreamweaver back from a perfect score, and that would be the production. It's dense, furious and surely thrashing, but there's something to the depth that makes my ears struggle a bit in places, and I feel like a few of the riffs might have been lent a greater impact without such an impregnable tone. That said, it's a minor complaint against such a wonderful work, a concept of depth and character that still holds up today as one of the most clever and fiendish of all thrash works, with a remarkable similarity to the black metal that has been spilling out of Europe for decades since. With such a firm grasp on songwriting, stage presence and the occult, it's a wonder Sabbat were not able to reap immense success, but this would be the last album with the classic line-up. A few of the members hired on a new singer and forged onward with the moody and horrible Mourning Has Broken (i.e. 'The Big Mistake'), and fortunately we were treated to years of Walkyier's pagan puns in Skyclad, before they too started to suck. But nothing would ever be quite the same...and it's no joke that the British band's first two albums belong in the annals of legend.