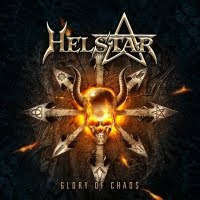 Back in 1988-89, Helstar had pretty much written themselves into a corner with excellent albums A Distant Thunder and Nosferatu, a corner that they would certainly not escape with the abysmal Multiples of Black, which might stand as one of the most miserable letdowns in all metal music history. Six years in the making, too! Well, the band's coma ended in 2008, 13 years post-atrocity, James Rivera having spent the interim dancing about a number of other acts trying to be Helstar. The King of Hell was a respectable if not highly appealing comeback, though the entire lineup of their Golden Age would not return, and here we arrive at the band's 7th full length effort, Glory of Chaos, with James Rivera, Jerry Abarca and Larry Barragan returning to the fold with Michael Lewis on drums and Robert Trevino in the second guitar seat. Both of whom have worked with the Helstar members in other project, so it's safe to say they 'get it'.

And damn, do they 'get it'. Glory of Chaos marks a notable increase in aggression for this band, and stands as by far the heaviest offering they've ever released. The first few tracks ("Angels Fall to Hell" and "Pandemonium") are misleading, because they paint the portrait of a pretty pure thrash band, almost like Destruction's masterwork The Antichrist if James Rivera had been handling the vocals. The guitar tone is superb, thick and punchy, but once you move beyond these, you start to see a return of the old Helstar's intricate, classically evolved guitar patterns songs like "Summer of Hate" and "Trinity of Heresy". Still, it's quite telling that the best of Glory of Chaos is where it hits the hardest, like the enormous "Bone Crusher" or punishing "Dethtrap", the latter of which feels like something Ritual Carnage of Japan might write, such pure and unwavering thrash force, with Rivera's siren-like laments cast upon it like a sorcerer's lamentation at a conjuration gone foul. There are also a number of other, intense cuts like "Alma Negra", "Monarch of Bloodshed" and "Anger" that ultimately add up to the feeling that you've just been blown into smithereens before you even realized you had gone numb and limbless.

If you asked me a month ago if I was interested in a thrash Helstar, I might have begrudgingly admitted that the potential was there all along, and that they certainly incorporated such elements into their 80s catalog, but that I'd be more interested in hearing A Distant Thunder Mk. II. Well, I am gladly chewing my own cowboy boots here, because the Texas tycoons have indeed succeeded in creating something tense and violent that puts most modern thrash to shame, without losing all of the characteristics that once graced their best work. Immense production values, impeccable musicianship, and an expansive, angered James Rivera ensure that Glory of Chaos is one of the best of its kind this year, and worth the cash whether you're into their old records or just want your head kicked in. Is it as memorable as the band's prime? Perhaps not, but it's a lot more than I bargained for, and with Forbidden and Helstar offering such wonderful surprises late this year, I have to wonder what might turn up next?