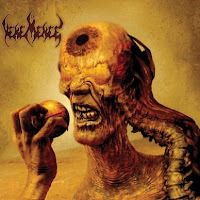 It's amazing that, in the ever shifting winds of the metal genre, the gulf of but a few years can transform a band's teeming potential into sodden excess, but that is precisely what occurred when the Arizona outfit Vehemence launched their third album, second for Metal Blade, called Helping the World to See. Granted, the cover image here is surreal, superior to the earlier albums, and I had hopes that the musical content might match its allure, but really this feels as if the band tried to re-create God Was Created, amplifying a few of that record's constituent elements to unwelcome levels, and forging a magnanimity that falls very flat on the fat curve of its own, bloated buttocks.

Where its predecessor managed climactic poles through taut, intense riffage unending, and the carefully written clean guitars, keyboards, and such, Helping the World to See tends to fail at strongarming the listener. "By Your Bedside" sounds like nearly any US band attempting the Swedish melodic death intensity, albeit with the gruff, guttural vocals and a shitty US metalcore breakdown that I almost laughed at. "Kill For God" seems a little closer to the last effort, with some bristling melodic riffs that culminate in a rather weak nod back to "She Never Noticed Me". "You Don't Have to Be Afraid Anymore" and "Alone in Your Presence" also bring back the acoustic guitars and subtle, narrative vocal textures, but once they both go metal you get pretty average post-At the Gates/In Flames riffing with a thrashing impetus. The remainder of the tracks are scattered with half-baked ideas at best, like the powerful melodic chords tossed into the bridge of "Her Beautiful Eyes" or "What Could Go Wrong?"

Coinciding with the rise of flaky 'New Wave of American Heavy Metal Bands' which are often little more than Gothenburg wannabe bands with Panterrible vocals and mosh core breakdowns, Helping the World to See feels all too contrived and forgettable. But to be honest, it's not a huge leap away from the album before it, just a leap sideways and then back. The songs are nowhere near as interesting, the production not as good, the lyrics tend to suck, the vocals relegated to typical grunts and snarling that once again sounds, and like the first Vehemence record, you get about 1-2 good parts per song and the rest is chaff, a composite of then-current trends striving to amount to the next Slaughter of the Soul, Jester Race, or Heartwork, and coming up well short of the goal. It's not as if the album were merely phoned in or defecated out, there is more refinement here than that, but it's incalcitrant against the inspirational underpinnings of its next oldest sibling.