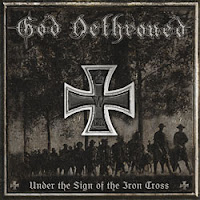 High on the fumes of war and history that delivered their prior album Passiondale, the Dutch terror tactics of God Dethroned have returned for yet another venture into the past, a grim reminder of the bloodied and storied architecture of the 20th century. While I concede that having Henri Sattler and his band of belligerents as social studies professors is an intense and exciting prospect, I do glean the notion that this WWI or WWII metal could become all too trendy, with Hail of Bullets as the obvious forerunner, and many others in the underground following suite (some pretty good, like Invasion). I worry that, like the trend in first person shooter entertainment that burdened the earlier 21st century of gaming, this might grow to some level of stagnancy in short order...but hell, it's better than zombies and rape fantasies, right?

Don't answer that. But you may have to answer to God Dethroned, for they are quite intent with Under the Sign of the Iron Cross to blow your fucking head off its foundation, so manic and focused are the compositions here. There is no subtlety whatsoever to a "Storm of Steel" or "The Killing is Faceless", and at best you're going to have the sprinkling of Scandinavian melodies like rain on a grim battlefield, or some clean vocal breaks as in the title track which, while not catchy, are at least not so annoying. The drumming here is particularly nasty, with Mike van der Plicht of Prostitute Disfigurement and Toxocara taking over the duties from Roel Sanders, and he sounds like a human carpet bombing. Sattler mans the helm like a commandant barking down damnation and condemnation upon the theater of war, nearly as percussive as the riffing and unbridled wrist and footwork raging below him. It's not all blitz-worthy, the band will often take a breather, for their own health or the listener's, but the road always leads to some inevitable outbreak.

Unfortunately, though God Dethroned perform this hyper, voluptuous array of Morbid Angel, Hate Eternal and Bolt Thrower with measured accuracy and unflinching passion, the songs are simply not here to survive more than a few spins of the attention, and I found it was about 2-3 interesting tracks short of a Passiondale or Lair of the White Worm, though still superior to 2006's disappointment, The Toxic Touch. The music resonates within the mix, and the album should be heard simply for the intense battery, but the faster material gets old rather quick, and the slower fare, when it transpires, is just not as hot as the munitions being fired off throughout the narrative. It's not exactly a letdown, because it stays pretty consistent to the prior album, but it never builds on Passiondale outside of few instances of sheer speed and force.