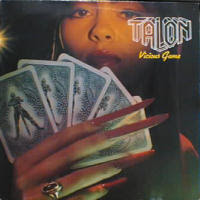 By the time of Talon's third album Vicious Game, it had become painfully obvious that something was not sticking with the metal buying public, because they had yet to develop much of a notoriety for themselves. The material had been declining in strength, so the band decided to adopt a full time vocalist and Uwe Hoffman would concentrate primarily on guitars. As it turns out, this was not such a bad choice, because this is arguably the best vocal performance you will find on any of their records, maintaining the general style of Hoffman but more consistent on the high end. He's also capable of a more effective mid range that cuts like a David Defeis of Virgin Steele, or Eric Adams of Manowar.

When I took my first glance at the vinyl, I was a little concerned that this change in lineup might also have brought about a shift in the band's style, towards a hard rock accessibility. This was not an uncommon occurrence for the period, as bands were either jumping hoops into the thrash game or the hard rock, radio frenzy, but fortunately Talon keep it pretty consistent with the prior efforts. Yes, the knight remains, even if he's reduced to the face of some long-nailed fortune teller's tarot (or playing) cards. The band always had a cross-cultural appeal between the metal and rock genres, and to be truthful, Vicious Game does strafe the line towards the latter more than Neutralized or Never Look Back, but for the most part, we're dealt the hand of solid heavy metal.

The album opens with this powerful synthesizer intro that really breeds anticipation that the record might kick off with something as forceful as the prior two, but "Vicious Game" teases that it's possibly a power ballad until the verse kick into mid-paced rocking, a worthwhile showcase for Hader's vocals as he runs from mid-ranged to screaming that seems half Udo, half Peavy Wagner. There are perhaps too many of these Accept/Judas Priest style rockers, like "Push It", "Sunrise" and "Hopeless Love", and they're not as interesting as the faster tracks like "Fever" which is very much like 80s Manowar, or late speedsters like "Kings or Fools" and "Rough and Ready", which channel Talon's strength into something more productive and memorable. As usual, the band incorporate a quickly forgotten power ballad, but this time it's shoved to the end of the album ("So Cold"), and sounds a little like Queensryche, strangely enough.

The production here is better than the previous albums, and I figured that this selection of songs might have given the band the edge they so desperately needed. Alas, Vicious Game would be the final effort from Talon, before they moved on to other projects and hopefully better lives. Robert Bobel briefly turned up in Evidence One, while drummer Tommy Resch played with Sinner. Perhaps the luckiest of them, Uwe Hoffman himself, got to play in Headhunter, the great thrash side-band of Destruction's Schmier. Poor Talon is barely given a mention or nod anywhere, but the avid collector of all things 80s and German could certainly do a lot worse than this album. Personally, I'd reach for Neutralized any day over the rest of the band's catalog, but Vicious Game would appeal most to the fan of lighter hair metal or hard rock. It's got some strong points (the vocals and mix), but not nearly enough of them. Rest in peace.