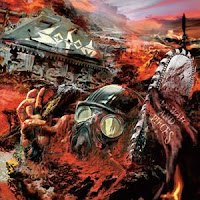 30 years of German thrash history do not come without a price, and that price is that Sodom will occasionally release an album that fails to puncture the great expectations manifest through Obsessed by Cruelty, Persecution Mania, Agent Orange, Better Off Dead, and so forth. Whether it was the band's 90s relapse into a punk frenzy, or the repeated attempts to reinvigorate their political and warfare driven classics after abandoning the Satan pit, there have been some dips in quality, never lasting long. In War and Pieces, the 13th studio long player from the Teutonic titans, feels like one such plunge into the sub-cellars of the memory, but it's not for lack of trying, and in this case, trying pretty damn hard.

Yes, In War and Pieces is ultimately an average thrash record, but it has a number of strengths that can't be argued. Tom Angelripper's vocals still sound vexed, as if he's still ready to set the world on fire at the drop of an incendiary. The production is eminent, one of the best or at least most accessible efforts in their entire career, and the songwriting is also quite diverse, with extended melodic passages that balance out the more direct, thrashing fare that returns to the 1987-89 period for inspiration. As a power trio, the band sound tight as you might expect from a persistent lineup since 1997, and Bernemann has a positive, thick tone to his playing which makes it difficult not to bang the head even at the most uninspiring patterns of notation. A few of these ragers: "Through Toxic Veins", "Nothing Counts More Than Blood", "Storm Raging Up" and "Stypic Parasite", kick some thorough ass, but there just too many that don't, despite the most violent of intentions.

"In War and Pieces", "Hellfire", "The Art of Killing Poetry" and the escalating thrash ballad "God Bless You" offer little more than forgettable riffs, and pieces like "Feigned Death Throes" tease us with something promising, then let us down gently, summoning only tortured nostalgia for the potential shown by the band's 2006 brain buster Sodom. In War and Pieces is as professional and driven as we could ever dream the Germans would remain after three decades, and it's in truth not a bad album, it just doesn't obliterate its target efficiently enough with the 47 minutes of focused artillery fire. There are no nuclear winters, agent oranges or volcanic sluts anywhere near the scene of this battle. If you're a Sodom die hard, of course, there is a bonus available in the limited edition that might tip your hand to your cash or credit card, and that's an additional live CD from the Wacken Open Air performance in 2007. It sounds pretty good, and the band include favorites like "Sodomy and Lust", "The Saw is the Law", "Ausgebombt" and "Outbreak of Evil", so even if you're reaction to the new material was limited like my own, there is that bit of incentive.