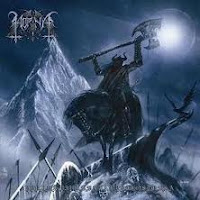 Perimä Vihassa Ja Verikostossa is the best yet in a series of obscure Horna recordings being re-issued through Frostscald Records, a storm of an EP which ghoulishly cleans up the carnage left behind on the battlefields of Kohti Yhdeksän Nousua and Haudankylmyyden Mailla, the band's first two cult status full-length albums, back when Nazgul (of Satanic Warmaster and a hundred other projects) was handling the vocals with cringe inducing, grim splendor and Gorthaur was bludgeoning along on the drum kit. It was originally only about 23 minutes long, but this release includes the bonus title track, which was lifted from the band's rare split with US black metal band Fog, so it saves a little trouble in having to track down that piece.

Here, Horna muster their characteristic monolith of suicidal and warlike sound, taking clear queues from the Norse and Swedish masters like Bathory, Immortal, Emperor, Burzum, and Mayhem, and channeling it through a dynamic if predictable slurry of songs that range from the majestic, middle pacing of "A Ring to Rule", to the scathing holocaust of crude force that is "Haudanusva", to the doom-laden mires of "Verikammari" and "Ghash Inras". This is an entirely raw recording, of course, like the wealth of the band's work, and you can hear the tones ripping at the edge of the envelope like so much overload, but I still feel that the instruments are clear and present enough that it shines with a savage elegance. The bass is loud and bombastic, the drums live and fresh, and the vocals entirely beautiful and sadistic, while the guitars just rip your fucking heart out and leave it on the field of the dead for any straggling survivor to stamp into paste. Seriously, Shagrath's tone here just reeks of destruction and terror.

Assuming that you don't expect the sweeping ballast of symphonic keyboards, or even a faint trace of progression, you should be alright with what Horna had whipped up here. I enjoy this small collection of tracks nearly as much as the early full-length efforts, and the 8 minute bonus track fits in extremely flush with the rest; with a crushing, epic fortitude of some undead juggernaut that promises decisive death and plague wherever it rolls. Finnish black metal has of course exploded since the 90s, but here you've got a taste of one of its most enduring legacies, that of Shagrath, herald of foul taste and purgatory for all those who follow his voracious march into one of the most thorough discographies in the entire genre. Sure, individual tunes here might not find major mileage against some of the full-length material, but its worth having if you appreciate the untainted, primal pulse of black metal's circulatory system.