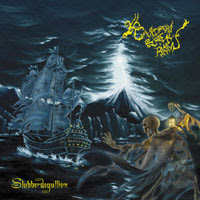 On a purely aesthetic level, Australia's Cauldron Black Ram holds an enormous appeal to me. Their 2004 debut Skulduggery was a brash, polluted mess of a good time, its morass of jarring, sludgy content shining through its flaws into the realm of flatulent joy. The lyrics conjure incredibly strange and atmospheric, blunt and minimal streams of historically derived imagery, and the band's style is also pretty far out, a clumsy conflagration of black, punk, death and doom that are as intentionally crude as they come. Coming six years later, Skubberdegullion doesn't fall far from the eaves of its ancestor, and with titles like "Seadog Assassins", "Black Market Trade of Whore and Blade", "Blunderbuss" and "Satanic Whores in Bestial Brothels", I had set myself up for another bout of abnormal bliss, stagnant rum in hand and dirtied, scummy beard reeking of the latest lay.

Perhaps its just that I'm older, or perhaps the music is just overall not as great on this record, but at the very least, Cauldron Black Ram remain loyal to their absurdity. Opener "Seadog Assassins" creates a foul smog of primal death metal, grinding off the simplified rocking drum beat, the best part being the black, rasped vocals that bounce across the guitars, a goofy waltz of horror. A few of the other, shorter pieces like "Blunderbuss" and "Black Douglass" are also quite fun, and there are some surprises like the dark, acoustic sewer-ballad "Rats" and the oddly conceived climate shifts of "The Cave", ranging from grime grind to creepy guitars. Sadly, the majority of the record consists of longer, plodding black/thrash pieces like "Black Market Trade of Whore and Blade" or "Haphazard Divulgence of Olde Evil", which show hints of promise but inevitably begun to dull as the rum shudders and stirs the stomach.

None of the material is all that bad, and it maintains the band's atmosphere of crude antiquity, but the result is an uneven album that comes across mildly confused. There are plenty things to like about them, and one can only expect such tremendous weirdness from current and former members of Portal, Misery's Omen, Denouncement Pyre, Myrddraal and so forth, but the sum of these parts does not equal a great album this time around. The production is dour and honest, nothing more than instruments given a lethal, obscure tone and cast straight into your eardrums like a cutlass-spit of rotting caramel apples. Skulduggery seemed a little more abusive and a little more of an anomaly for its day, and better written, whereas almost all of the thrills here are purely lyrical and aurally environmental.