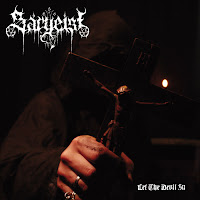 Though I'm fond of a great many works written by the blood-dipped pen of Shatraug, it is rare that I would use the term 'inspiring' by which to define them. Yes, Horna and Behexen are both ineffable agents of the ravenous Finnish sound, and Mortualia offers us a moratorium for all hopes and dreams, and the man has about 50 other projects he's been involved with. But when the first two tracks of the latest Sargeist record storm forth as an unflinching, escalating revel in the rituals of the prince of darkness, the last you thing I would expect was to be 'moved'. After all, hasn't every black metal riff already been performed countless times, with the same strident fervor and calculated step, the same harrowing sense for melody and misanthropic vocal reach?

According to Let the Devil In, this is not the case. Sure, you can identify just about every trace of the band's sound against the larger, orthodox black metal tradition. Every elemental component fits the band's tried and tested approach from earlier years ala Satanic Black Devotion, but there is some nearly intangible sprig of bliss here, some unidentified grease spit upon the gears of hellish exultation that sends the third Sargeist full-length screaming to both the top tier of the conflagration, and very near the top of the black metal records I've heard over the past year. They've written themselves a beast of an effort here that somehow manages to seem refreshing, despite the fact that in no sense at all does it deviate from the parameters of its genre, and the credit must be squarely placed upon the horns of the guitar riffs of Shatraug, the solid, dynamic drumming of Horns and the amazing, fully fleshed vocal torments of Hoath Torog.

Let the Devil In knows to immediately storm the gates of your diminishing heart with its early tracks, and "Empire of Suffering" delivers that titular, unholy host straight to your nether regions with melodic certainty; a last, desperate charge of the night brigade that cedes into a beautiful mid-paced parade of lost souls. "A Spell to Awaken the Temple" digs a little deeper into the fret board, but continues to flood through the listener with emotional duress and the clarion call to battle. Neither of these tracks are complex in any way, but they sound superb thanks to the mix, and they balance their focused aggression with a subtle sobriety. Then a funny thing happens: the album never ceases to inspire awe. Paces might change, as with the burgeoning rock rhythm behind "From the Black Coffin Lair", or the dour and sluggishly dense "Nocturnal Revelation" and "Twilight Breath of Satan", but the thick broth of well placed chords and huge, sinister vocals simply never ends, until the final chord of "As Darkness Tears the World Apart".

By this point I've already heaped quite a high level of praise upon this Sargeist record, but I should remind you to in no way expect anything out of the ordinary. The album's ability to do so much with so little is precisely why it's so effective and memorable. Not even a faint trace of originality is executed, yet the results are overwhelming. If you couldn't care less about any emission from this genre since the early 90s (barring the avant-garde exceptions), that is not likely to change. But to ignore this would be a disservice, because it's simply a great black metal record, their best to date, and one that should easily stave off the hunger of the fans for another half-decade while the Horna/Behexen machine keeps spinning.