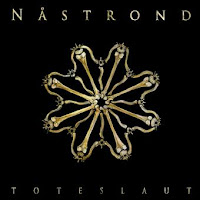 Nåstrond are one of the more unusual, interesting Swedish black metal acts to arrive in the early to mid 90s, eschewing the raw Norse worship or popular melodic death inflection of a Dissection to immerse their sound into the secrecy of ritual and mysticism. Please do not misunderstand me. There are melodies here, and certainly the tone is pretty raw even for its day, but there was something transitive and creepy about the approach of this duo that felt mildly ahead of its time. The band have yet to receive an adequate wave of recognition, but Frostscald Records might be able to help with this, through a pair of reissues of the first two albums, each packaged with some newer, subtler artwork.

Toteslaut is the first of these, the band's 1995 full-length debut, and in my opinion their best work. An obvious point of comparison for the sound here would be the early, rugged material of Sweden's famous Bathory, as Draugr and Arganas take an incredibly carnal, direct approach, but you will also hear traces of early USBM like Profanatica/Havohej with the turbulent tides of the guitar tone. Beyond that, though, the incorporation of wonderfully primal synthesizers and the occasional chant moves Nåstrond into a territory they could boldly call their own, a vortex of obscure mysticism and raucous, grinding black metal that compensates for its primacy with an overwhelming level of atmosphere, with a variety of vocals that includes Draugr's devious, full snarling and the cleaner sort that well suits the band's penchant for segues of necromantic audio magick.

There are traces here of the more ambient beast the band would later experiment with in more depth, like the ritual intro "Xolotl", or the full track "Jai Ma Kali", which is all vocals, percussion, and sitar strumming. The title track finale is also a haunting piece with steady percussion, eerie male chants and the sample of a woman speaking in German. However, the bulk of the material is crude, driving black metal played at a largely mid-pace with the melodies tucked into the viral chords, and this is where the band truly shines. Tracks like the somber, searing "Lord of the Woods", out of control "May the Rotten Bones Absorb Life Again", and glorious, screaming elegy of "Neuntoter (Yo Soy El Roy!)" all provoke a nostalgia for this period that is rarely captured even by bands that attempt to channel the pure 'necro' aesthetic even today. Several incorporate heavy use of synth, such as "En sång från en pestbesmittad grav", but it only adds to the band's submersed sense of majesty, the fading of old ways, forever captured here.

Toteslaut is a great album, and well worth the dollar if you value the virtues of deep black metal atmospherics carved primarily through honest, festering compositions that conspire below the rasping, sinister tones of the expectant sneer. It might not carry the melodic weight of The Somberlain or Far Away from the Sun, and it also isn't invested in the blasting chaos of the early Marduk catalog, but there is something blissful and blasphemous about how its various joints fuse together into a skeletal cacophony. Along with Mörk Gryning and Algaion, they represent one of those unsung Swedish squads that deserve a second chance, or a first glance from any newcomer to the genre that respects quality over presentation, creepiness above complexity.