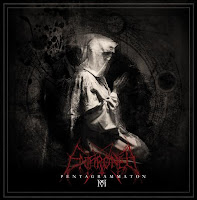 Enthroned have got to be one of the most and least interesting black metal bands in the universe, simultaneously, and this cannot be the simplest of tasks to accomplish. Their debut Prophecies of Pagan Fire was a strong if traditional effort, but since that point, the band seem to have developed on a split hair: on one hand, their lyrics, concepts, titles and artistic visions have all come along way, through would be efforts like Armoured Bestial Hell, XES Haereticum and Tetra Karcist. On the other hand, they're still playing rather run of the mill black metal fare, out of which nothing staggeringly important ever seems to manifest, despite an intense effort on the part of their limbs and vile spirits.

Pentagrammaton is their 8th full-length, and it is choked with so much of what it should take to succeed in this realm, and yet it flounders in its ability to deliver memorable content. The contributions here from the newer members are powerful, with storm-like, taut drumming skills and driving guitars, all complementing the centrifugal force of Nornagest, whose black howling is as voracious as ever since taking over this duty. The selection of tracks are dynamic and potent, but they almost unanimously fail to engage the memory beyond just blowing the listener's mind out the back of his/her head. They rarely outlast their welcome, as we can sense in the strange, thrash driven atmosphere of "Magnvs Princeps Leopardi" or the battering "Rion Riorrim", or the charging slaughter of "Nehas't", with only one bloated epic to be had in the nearly 9 minutes of "Unconscious Minds" which ironically supplies some of the strongest moments on the album.

Enthroned manage all the intensity of the top flight Norse and Swedish bands. They can run gun to gun against a 1349 or Marduk with ease, and there is no question Pentagrammaton presents some dire atmosphere ("I Missi Solemnibvs", "Ornament of Grace") and punishing exercise ("The Vitalized Shell"). But for all the ritual knives it runs across your throat, for all the artillery it launches at your weakened mortal shell, so few of the riffs deliver anything worth sticking to, any final nail in your coffin, and the result is another of those ceaseless efforts that you wish you could wrap yourself around. Certainly, Enthroned remain one of their country's chief exports in this field: their technical ability, thoughtful occult concepts and ghastly, dark production standards would be hard for anyone to match. If only their black breath of fire could do more than scorch my awareness, but reduce me to cinders.