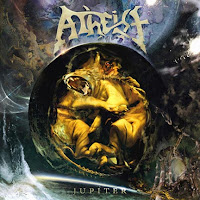 I was a firm enough follower of Atheist for their first few albums, the vicious Piece of Time and the more interesting sophomore Unquestionable Presence, but I've never attributed the same level of praise upon them that others have so insisted upon. They were a potent, competent contribution to a generational genre clash that unfortunately would not bear enough fruit, plagued with the early death of profound bassist Roger Patterson and then the uneven train wreck of 1993 known as Elements. I never found their schizoid flights of unrest quite as compelling as the Cynic debut Focus, or the early 90s efforts by Holland's mighty Pestilence, but they had their place, and like those acts, they have been reborn to a new century with an impeccably crafted comeback album.

Jupiter will have its naysayers, of course, void-like murmurs and mouth breathers that will naturally reject the band's course despite the fact that it retains surprisingly loyal to their earlier trajectory. But had the tables been turned, this album arriving as their third in the mid 90s, it would likely be heralded as a classic for all time. It's amazingly acrobatic and aggressive at the same time, and unlike the diminishing hipness of a Dillinger Escape Plan, it somehow evades the blinding din of technicality over structure. Each track is a fascinating experiment in twisting thrash/death psychosis that bleeds ambition, breeds intuition, and never once insults the eager audience. Kelly Shaefer's at his arguable best, creating a gnarled dementia through his strangely offsetting nasal barks, and the three guitarists (Shaefer himself, and Jonathan Thompson and Chris Baker of Gnostic) explode with ideas. Thompson is also an adequate bassist, covering for the band's alumni Patterson and Tony Choy, and Steve Flynn returns to the drum position he left after the second album.

We should also extend some credit to Jason Suecof, who to this point has engineered a slew of over hyped albums that bounced between technical death metal and the trendier metalcore climes. Jupiter is by far his best and most important contribution to date, and through his own technical death background, he really knows how to capture the band's spastic fretting and the 'bounce' of the jazzy, fusion-based rhythmic fundamentals. "Fictitious Glide" and "Fraudulent Cloth" are two of my favorites here, with enough frenetic mass to keep me enthralled through many repeated listens, incorporating the precise, clinical surgery so inclement to the success of this style, manifest through paranoid patterns and looping labyrinths of miasma. Then exists the more atmospheric dementia of a "Live and Live Again", or the thrusting discord of "When the Beast", or the writhing narcotic death of "Tortoise the Titan".

This has been a crazy few years for bands returning from a career coma with renewed ambition, and like most, Atheist seem sincere in a desire to get 'back on track'. Had bands like this persisted through the dead spot of the 90s, who knows what the form might have evolved into this past decade, but sometimes you've gotta stretch your wings before you can fly again. Jupiter is not perfect; in my opinion, no Atheist record ever has been, but it's a tight and terrifying experience which retains its luster even after the initial shock of the band's stylistic flexing wears down into their rapt attention to atmosphere and nuance, and this is arguably their most devious and delicious child of love and hate to date.