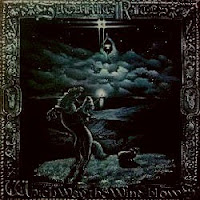 Female fronted NWOBHM bands were not entirely unheard of, what with Rock Goddess and the more famous Girlschool covering the more blunt edge of the genre, both having some fine records. But Satanic Rites should also be counted among such legends, with a sound that might best be described as a Girlschool with keyboards, giving them a slight 70s/80s prog element that set them apart. The band were also similar to Wichfynde in that they possessed a rather sinister name that didn't have a lot to do with their actual music, which some might consider unfortunate, as the prospect of a devil worshiping female British metal band in the early 80s is pure untapped awesome...

No, Which Way the Wind Blows is not quite so dark as their name or cover art might imply, but it's still a very catchy debut record which could easily have won them more attention alongside the explosive success of, say, a Def Leppard, one of the few bands in the scene to reap enormous rewards due to their accessibility. Satanic Rites were more of a one trick pony in that they wrote mostly steady, mid-paced rockers like "Burn in Hell" with its snappy descending guitar fills, or "Fear of the Night", which would likely thrill fans of Lita Ford, Pat Benatar and so forth, if they could imagine the assertion of future wavy keyboards. Deborah Webster certainly had a comparable voice, which she flexes here across the pumping "Law of the Land", the sailing "Slam the Door", the Jefferson metal Airplane of "Turn Around", and the closing title track, a power ballad with a spacious, bluesy atmosphere that would be perfect for hauling out the old Zippo.

Perhaps at the time of its arrival, the use of these keyboards might have felt slightly out of date or place, but in retrospect, they offer the material a beautiful flight of fancy that has evolved into a certain timelessness, impossible to really capture outside of these old recordings. The guitar riffs were pretty standard fare ala Def Leppard, Judas Priest and Saxon, and not really a highlight of the band without the vocals and keys to accompany them, but all combined, it makes for a magical trip that should have you stalking the used car markets to find that van you always wanted to airbrush, or growing a fucking mustache, which you should already have done. This is no trashy faux glam like the dreadful American counterparts like Vixen; it's fun but hard hitting NWOBHM with effective chorus sections, and since it is now available through a recent re-issue on Cult Metal Classics which includes their "Live to Ride/Hit and Run" single, there is no excuse for the collector to be skipping out on it. Yeah, the cover art is awesome.