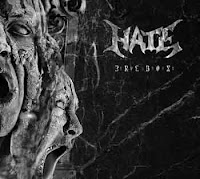 Erebos marks the 20th year of existence for Poland's Hate, one of the most consistent death metal acts in a massive scene, steadily managing to improve themselves over the course of seven albums, culminating in works like Awakening of the Liar and Anaclasis: A Haunting Gospel of Malice & Hatred, which I'd consider their best. Granted, the band have never quite reaped the rewards of their countrymen Vader or Behemoth, and frankly, this might stem from the similar sounds they produce. Erebos is considerably closer to the latter than the former, but they could hardly be dubbed a rip off, since they were performing brutal death while Behemoth were still storming the Baltic in black metal getup!

That said, the writing on Erebos is quite close in tone, with storms of blast beats, black-tinged guitar lines and vocals that sound almost a sibling to Nergal or Piotr. The benefit here, though, is that Hate have produced a more dynamic offering than the recent Behemoth records, with a thrashing and grooving impulse wrought through through various set pieces like "Quintessence of Higher Suffering" and "Transsubstance". I mentioned before the black metal twist on the guitars, and this is generally only manifest through some of the chords (and band pics), but they perform with an aesthetic that might shiver the spines of some of the more technically inclined black metal acts, long on production and riffs. The most immersible points of Erebos do come later in the album, like the engrossing "Hexagony", psycho-glorious "Hero Cults" and winding, frothing patterns of "Wrists", which achieve a surprising depth due to glints of atmosphere the guitars conjure against the pummeling of the central riffs.

That Hate have matured is not in contention, because they've here produced an album that can survive a number of listens without losing the listener's attention. Granted, it's not perfect, and a few of the tracks have a broader impact than others. "Lux Aeterna" and title track "Erebos" feel like the typical flexing of limbs you here on the more mundane Behemoth tracks of the past decade, energetic but forgettable, where others like "Trinity Moons" excel because they pace themselves with more atmospheric riffing. Adam has surrounded himself with an experienced group with credits like Naumachia, Chaosphere, Moloch, Crionics and Sunwheel, so the performances are top notch, and the production is suggestive and dark, while letting the strings of discord dance with clarity over the bludgeoning, tight metallic matrices. I might not have enjoyed Erebos so much as the latest efforts from Vader or Lost Soul, but it's a well crafted album and nothing whatsoever to scoff at.