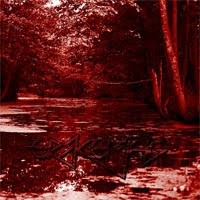 Passover is a pleasant offering from the rare Latvian artist Urskumug, but some might consider it a clear step sideways or backwards from Am Nodr. Here's the catch: Passover (Pareja) is not really a new album, but a re-issue of the band's 2004 demo album. The song structures here are simpler and draw a more direct comparison to symphonic Norse bands like Dimmu Borgir or Emperor, however the synth sounds used are often quite unusual, I'd risk even calling them 'cheesy'. Thankfully, this is not the brand of cheese that repels the listener from the contents of the album, but only draws him in. Personally, I enjoy atmospheric black metal which sacrifices all to achieve that dreamy, otherworldly effect, and I feel that Passover achieves this, though perhaps not in spades.

A dark, industrial/ambient piece called "Her Majesty Silence" initiates the album, before we are driven towards the dire delights of the band's namesake "Urskumug", a creepy track with typical black/thrash riffs graced in quirky, memorable synth passages. "The Third" feels a lot more typical, just about any European band in the 90s might have produced it, but that doesn't mean it lacks immersion. But the contents continue to improve as you waltz deeper into the quizzical streams of history, the haunted house pondering of "When the World Becomes Ice", the Baltic reaving of "Nāvas Ēna", and the steady belligerent romping of "Warriors End". Closer "The Heavens Cave" might just be the most memorable piece on the album, with frightening keys that lash out against windswept, savage streams of beautiful chords.

There are a few ambient pieces spread throughout the effort, and these lend an eerie fabric to counterbalance the siege of the central compositions. The production is almost the same level as the debut Am Nodr, with visible, well honed guitars, thundering drums and ripping vocals. Where Passover falls behind the debut is in its actual approach. We get some solid, atmospheric black metal here with hints of symphonic progression, but almost all the tribal weaving elements of Am Nodr are lacking here, yet to be developed in Krauklis' sound. If you actually enjoyed that 2006 album, then I don't see enough of a difference that you couldn't find something to like here, but aside from the great atmosphere in the synthesizers, there are few standout riffs, and I don't often feel the desire to visit it when there are better alternatives available.