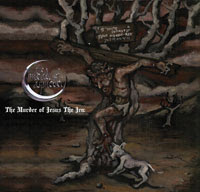 A new Meads of Asphodel album wasn't on my radar at all for the year.  Even when I was about to put it on, my expectations didn't extend past a bit of raucous blackened fun.  Some blasphemy, a touch of chuckles, certainly a bit of the old head bangs.  Yet, as the intro and its oh-so-serious piano and dramatic circus orchestration accompanying "on a cold spring morning, around AD 30, a man was hung on a tree upon a mound of dirt - this is the story of a man made god" kicked in, I knew this was going to be a bit more than all that.  The irreverent Judeic-mocking humour you would expect is here, yet The Murder of Jesus the Jew showcases a mad progression of the style these Brits have been cultivating since their inception, with an eccentric take on metal that is easily one of the strangest offerings this year.

This is a funny album.  We're not talking hurp durp Adult Swim metal cliches - the laughs here are all at the expense of the holy.  However. unlike the pure merry-making of the excommunicated Jaldaboath, the Meads have a sort of holistic approach to their music that makes them more than just a humourous band.  Their Mike Patton-esque blend of every music element under the sun - symphonic black metal, folk, pop-punk, 70s prog solos, lo-fi medieval orchestration, arena rock, clap tracks, fucking flamenco even - is a biblical clusterfuck of ideas that illogically flow together despite their complete inconsistency.  This sets the stage for the irreverent and accusatory apocrypha of the lyrics, and when taken in as a whole, the album becomes an ideological feedback loop as the music and vocals join together in a unified lampooning of organized religion's number one man.

The longer songs on the album are their own progressive tour de force, such as the mix of ripping black metal, meandering progressive solos, ethereal female-led congregation choir, and rollicking anthemic climax of "My Psychotic Sand Deity."  Others, typically in the four minute range, are more stylistically focused - "Stiller of Tempests" sticks throughout to its high-noon Wild West acoustic doom, while the following song "Man from Kerioth" is a pointed assault of psychadelic Hawkwind synths, working class British punk vocals, and spiteful symphonic black metal.  The balance between (and within) the two types of composition is satisfying, giving enough time and attention to flesh out ideas evenly.

The Murder of Jesus the Jew is compelling to listen all the way through because you have no fucking clue what could happen every thirty seconds, but the individual elements are still satisfying enough to warrant hearing again. That these bards have managed to cover so much ground yet avoid sprawling, bloated songs or the sugary residue of ADD is a testament to the band's maturity, not to mention the obvious experience required to meld something so disparate as this into a unified whole.  Every now and then I did find certain vocal parts to be a bit repetitious, and there are some weak chug-along metal riffs at times, but not enough to seriously hurt my enjoyment of the album.  If you like your music on the senile end of the reed, can take a bit of fun with your blasphemy, or are merely looking for something different, the Meads have you covered.

http://www.themeadsofasphodel.com
Posted by is this your life? at 2:33 PM

Just thought I'd drop the link to Metatron's notes on the album's concept and lyrics, very informative: