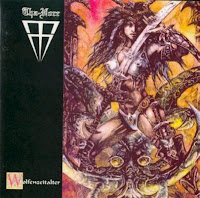 Considering how infectious the sounds of Darkthrone, Mayhem, Burzum, Immortal, and Emperor had become by the mid 90s, it's a wonder that an album like Wolfenzeitalter did not stir up more interest upon its initial release, because it traveled such a similar path. Granted, Tha-Norr were not Norwegian, but German, and this might have played a disadvantage, since all eyes and ears were tuned to the hot scene of the time, but their sole album's strong and sexy female warrior cover art and cool logo-symbol can't hide the inescapable truth, that this was one of the best German black metal efforts of the 90s.

It's not without some flaws, and in particular I'd point out the barely audible drum sound and the fact that the guitars will often cycle through boring note patterns a little past their welcome (a typical symptom of the times, which unfortunately still plagues much of the black metal underground). However, I truly enjoy the straightforward, raw approach this band takes, the honest, ripping guitar tone and the resonance they are able to create through the recording alone. Tracks like "Sathanas, Triumphator!" and "Bowels of My Beloved Earth" are harsh envoys of sadistic, turbulent atmosphere under crushing junkyard rust guitar tones, and "The Fortress Will Fall" is an epic that might have graced any of Bathory's 90s Viking works. The plodding, dour bass intro to "Calling Forth the Spirits of the Elements" proves that the band were not above some slight level of experimentation, and their ambient track "Fegefeuer" is an oddity stoked up on Tangerine Dream...

Regrettably, Tha-Norr would not continue beyond this sole offering, and it rattled around in record bin obscurity or the collections of the few who were lucky enough to snag the initial editions of the Nazgul's Eyrie roster. I can't say I blame anyone for missing it, because I'd only become aware of the album myself in the 21st century, but it has since come out on LP again in 2009 (again, with a very limited availability). Wolfenzeitalter is perhaps not so remarkable as its Norse counterparts, who clearly had the jump on this style, but any necromancers seeking out the traditional, no-frills black metal of the 90s would do well in experiencing its raw appeal. Today, Germany's built up quite a scene for black metal, but in those twilit years it was not so much the case, and Tha-Norr were an opal in the nearly empty rough.