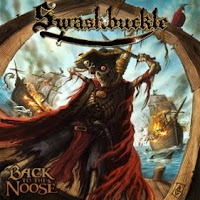 Crewed by the Damned was a classic example of what might be seen as refractory inspiration: high seas, pirate tumescence rendered mute and unconscious by nullified writing that did not quite service its thematic folly. The jokes were not funny, and didn't even really strive to be. The concept was not novel, having been mastered in the mid-80s by a particular German band. The composition was not cut out to serve as a deckhand for mediocre 80s thrash, and not even on the level of most of the 21st century 'retro thrash' artists (though Swashbuckle's possibly unconscious NY hardcore inclinations made it a little more unique).

Alas, as happens so often in the spheres of aural metallurgy, weak music + marketable concept = score, and thus Swashbuckle would soon be flagon to flagon with hideous ear sores like the regrettable Dethklok or 3 Inches of Blood, poisoned apples in the eyes of the ironic and identity-starved high school/college stoner metal infestation who must have grown tired of photoshopping Immortal pictures and season umpteen of Aqua Teen Hunger Force. Whisked away onto the Nuclear Blast roster, the nautical thrashers were one step away from bridge duty. But let's not accuse Swashbuckle of having intentionally plotted any of this crash course, as the project was obviously out to have a bit of piss and fun, whores and rum, and can even they have known that they'd see such success with the formula? No, and in all fairness, Back to the Noose would be at least a small step up from their lamentable debut.

Once more, the Jersey crew decide to offer a lot of bang for the buck, with a total of 21 tracks, most of which are of metallic, angry thrashing nature that feels more suited to the street or mosh pit than any weathered vessel at sea. "Splash-N-Thrash", "Rounds of Rum", and "Back to the Noose" are all plank walking punishments that mark for a notable increase in intensity since the limp and listless Crewed by the Damned, surges of more technical, dense thrashing frivolity that feel like a seafaring alternative to Austrian Death Machine. The band are having a lot of fun with the lyrics, and like the Pirates of the Caribbean films, they expand upon the simple pirate backstabbing and cannon fire with more fanastical tracks like "It Came from the Deep!" and, well, a lot more about drinking. These are once more affixed with amusing traditional shanties like "Cloudy With a Chance of Piracy", "The Tradewinds", and Spanish flavored "La Leyenda", as well as a handful of tiny, thrash/core blitzes like "We Sunk Your Battleship" and "Whirlpit".

But for all the band's splashing around, for all the improvements in production, fluidity of expression, and incessant barrage of energies, nearly every track on the album fails to stick to the memory, like blank-ball firing cannons of good intentions that simply don't have the mirth and compositional value to truly absorb the listener into either the band's subject matter or the fun and irony that such a realm might unintentionally evoke. Is "Rime of the Haggard Mariner" funny? Why bother, because most of these lyrics are played all too straight, and thus a strange imbalance is manifest here that never fully commits to one side or the other. Back to the Noose is a better effort than its predecessor, but it's ultimately denigrated to Cutthroat Island status rather than The Sea Hawk; Patchy the Pirate rather than an Edward Teach or José Gasparilla.