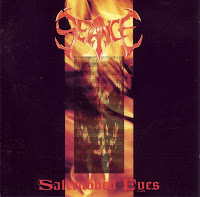 1993 seemed to be a year for change in Swedish death metal, signified primarily by the evolution of Entombed into their full blown death & roll motif via Wolverine Blues, but also occurring in some of the lesser known acts. Seance is one such example, who for their sophomore Saltrubbed Eyes, decided to pack a bit more dynamic punch into their writing than Fornever Laid to Rest. The result is an album that I didn't enjoy quite so much, but it still has a number of worthwhile tracks and characteristics that will often drag me back for a listen. No one should fear that the Swedes have lost their edge, though, for while this album is not the same impenetrable wall of skulls as its predecessor, its still decidedly brutal.

The alterations here are borne not only of tone, but also the rationing of riffs. You'll notice that the bass tone here is enormous, far more prevalent than on the debut, and this is one of the highlights of the album, because there is this constant momentum created that keeps the attention span bouncing alongside the flights of Kampner and Jensen's riffing fury that explode on a tight schedule, as if they were plastique left at regular intervals alongside the concrete supports of the rhythm section. Saltrubbed Eyes shifts between the poles of grinding, blasted velocity and percussive groove, early and often with the Entombed meets Napalm Death overture "Soulerosion", or the start/stop, almost mosh core slog of "13th Moon". "Saltrubbed Eyes" itself is one of the dynamic tracks, plugging along with dumb force as the guitars begin to spike out dire melodic transmissions, but some of the chugging here feels a little too mired in the emergent groove metal of the day.

Far better are the splattering hammers of "Controlled Bleeding", the haunted, developing atmosphere of "Angelmeat (Part II)", and the enveloping grind-off that is "Skinless". I also have a fondness for the closing instrumental, "Hidden Under Scars", which is all dour rock grooves and enormous bass moving at a sluggish upswing, later bursting into Swedish approximation of Bolt Thrower and then an acoustic break. This is an example of diversified strength, and cement proof that Saltrubbed Eyes is a more 'interesting' album than the Seance debut. However, it's just not as solid, nor does it really call to me from the shelf when I'm looking for something so fluid, cryptic and unforgiving. This album doesn't go nearly as far out on a limb as Wolverine Blues, or Desultory's less impressive Swallow the Snake, but there's still a feeling of urban progression, of an attempt to bridge the band's brutality into the grindcore, hardcore and groove metal spaces that coursed through the 90s. Luckily, for all this, it's still pretty good.