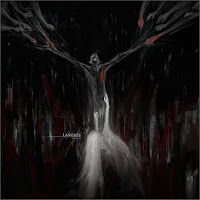 I'm sure my feelings on the most prominent of Neige's projects, Alcest, are already well documented somewhere out in the vast internet, but I've hardly got a hate on for anything else the guy has done. Amesoeurs wasn't all that shabby, and his earlier drumming for Peste Noire and Mortifera shouldn't be overlooked, but the man is hardly the savior of style and grace that many have lauded him to be, and I'm almost positive he'd agree. That said, the guy is enormously popular, so it's not a surprise the German Lantlôs, who run in similar circles of sound, would enlist the Frenchman to front their sophomore effort, the sequel to the well-received s/t album in 2008. His aggressive, tortured throat is perfect for the wall of sound, post-rock influences so fluent and important to the compositions here, and his cleans are actually a positive addition for this album's chilling, negative atmosphere.

Unfortunately, .Neon is one of the most perplexing albums I've come across lately in this entire field of post-black experimentation, because while it creates the skeleton of an amazing creature, the actual flesh upon the frame is wholly dull and numbing. I realize that is the intent of such a work, but I'm not referring to the emotional effect so much as I am to the notes and composition. Tranquil segues of drifting post-rock cycle into screaming patterns of melodic chords in "Pulse/Surreal", while some take it to the next level of Burzum and Weakling adoration, surges of streaming black metal vitriol still simmering with the weave of dreamy chords, as in "These Nights Were Ours". The resulting product is both Romantic and hostile, sincere and surreal, yet I just can't get over the fact that these guitars are not written in successful or memorable patterns, and thus I feel all too left out to dry.

Perhaps the one song where I felt a perfunctory momentum carrying me would be "Coma", but this is already pretty late on the album, and the following title track drags me straight back to the coma from which "Coma" ironically aroused me. The real shame is that, from a tempo standpoint, Lantlôs knows exactly when to shift to the fore and rear. The songs were crafted with some assurance that they would not drive the witness into cacophonous disinterest, but the blood and veins of the writing simply do not live up to the marrow upon which they are set into circulation. It's somewhat comparable to bands like Heretoir or Alcest, the latter being far more enamored of the tranquil side of the coin, but then, if you know me, then you know that's not really saying all that much. Lantlôs possess the structure for success, and obviously the personnel, but I feel that they need to dig in a little more in their writing process and really make those notes shine in patterns as hypnotic as they deserve.