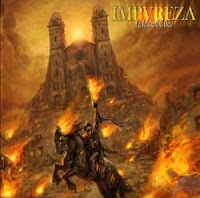 Impvreza are a French band, but you might initially find yourself fooled, because they perform blackened death metal, in Spanish, incorporating flamenco guitar parts. This is a fascinating prospect, of course, and I'd be lying if I denied that this element was what drew me to checking the band out in the first place. Unfortunately, their debut album suffers from what so many novel projects like this tend to overlook, that you've got to master the metal itself in addition to the outside influence. I will absolutely credit Imprvreza for pulling off their constant segues into epic, gladiatorial flamenco, complete with the festive shouts and viral speed the genre entails, but it's the brutal side of La Iglesia del Odio that sometimes comes up short.

Oh, it's not bad, I'll grant you that, and the first few bursts "El Gitano Maldito" and "Marranes" offer you a mix of Krisiun, Deicide or Morbid Angel-style bludgeoning death rhythms, intense double bass drumming, harrowing grooves, and most importantly...engaging if brief spurts of Spanish revolution. In places, the tracks escalate to epic heights, making the listener feel as if he/she is about to engage in some fight for his/her life, and this is precisely what I was hoping for. But when you break down the actual metal guitar riffs, which make up the majority of the album, they're not infinitely compelling. Often, in "La Luz de la Luna Negra" or "Y Corre la Sangre", I would find myself delving into one of the guitar lines, feeling my head begin its incline towards a good banging, and then the rhythms would continue to shift into different territory, as many more technical black/death metal bands are won to do, and this is sometimes tiring.

I mentioned that there's a bit of black metal here too, and this manifests in one of the album's better and briefer tracks, "La Checa del Perverso", which opens with an extended, delightful flamenco passage and then transforms into a driving, brutal twist of old school, Neanderthal death riffing and sheens of razor-like atmospheric black notation. It's a nice combination when it all works together, though the dual guttural/rasp vocals (think Deicide) are sadly overbearing. The 8+ minute closer "En el Deserto de la Creencia" is also one of the finer pieces on the album. La Iglesia del Odio is functional, but on the whole its mesh of bludgeoning brutality and wisps of traditional tantalization feel somewhat oppressed, somewhat shy of a whole. Then again, with such an interesting approach to their style, it becomes only a matter of refinement to get it right, and I'm sure this is not the last we'll hear of them. A lot is happening on this record, it just isn't always happening in a satisfying sequence.