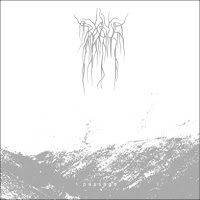 Managing the lethargy of the funeral doom genre is a difficult task, one that so few of its practitioners succeed in, and that's probably because they grant themselves so narrow of a berth in which to operate. Bosque is a Portuguese one piece performing an ambient branch of this admittedly sparse sub-genre, and I don't think I could ever accuse him of any sort of 'narrow' mindset, since they explore the style with a pretty interesting sense for sonic structure that involves a mix of metallic and clean guitars, distant vocal echoes and baleful percussion that hovers at or over the edge of nonexistence. Combine this with their bright but bleak cover art, unintelligible logo and supra-sensory lyrics, and you've got an album here, Passage, that is both alien and wondrous, if ultimately not all that effective.

D.M. performs everything, and to his credit, he's a master at 'glazing' the moribund, lamentable doom rhythms with sounds that help render their grisly fat into something airy, something beyond the ease of mere meaty confrontation. The opening moments channel a quizzical, resonant lo-fi labyrinth of circular ambient waves, and when the doom riffs do erupt in the 13+ minute "Erasure", they are not particularly evil seeming. "Fields of Light" is ironically a bit more dire, repeating its numbing scriptures until they weigh heavily upon the conscience, a subtle and tinny drum serving as your measuring unit of the void. "Behind" is but 90 seconds of clean, soothing guitars and sailing, almost chant-like vocals that soon disappear as the nearly 19 minute finale, "Candles" traipses in to clean up the initial pair of epics with resilient, tonal outbreaks of guitar wailing against dulled melodies, shifting several times throughout as if the incense of regret were wafting smoke trails through a number of levels, or 'floors' of conscious oblivion.

Passage is a rare funeral doom recording in that I managed to survive it without becoming mired in infinite boredom, and that says a lot. D.M.'s guitars are not extremely involved, but it's their interaction with the other, minimalist elements of the sound that create the atmosphere worth visiting, even if the album is almost completely ineffective in the wrong setting. This is like having some perplexed, dying divinity breathing its final breaths into a bystander, that bystander being you, an unending assail of light and eerie warmth that should terrify you, but you remain transfixed. This is a piece purely of mood, and void of any and all complexity aside from the images it might evoke into your imagination. To that extent, it might be worth your investment of time, though I'm not sure of its level of replay value, once the experience has culminated in your personal vision.