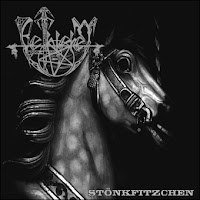 Last year's remastered re-release of S.U.i.Z.i.D, with Kvarforth's vocals, was absolutely unwelcome at my table, since the original is a classic in need of no reconstruction whatsoever, and its new visage did nothing but pale alongside the original. However, let this not be a reflection on either Kvarforth's abilities or the general quality of Bethlehem's body of work, because neither are really in question. With the Stönkfitzchen EP, the two forces continue their relationship in a more welcome fashion: with new material that returns to the S.U.i.Z.i.D era, without completely abandoning the more progressive Gothic rock transformation the band underwent on their 21st century fare like Mein Weg.

There IS one rehashed track here from S.U.i.Z.i.D., which is of course the incredible "Yesterday I Already Died Today", once again rendered with Kvarforth's vocals. And once again, it's not quite as good as the original, despite the added melodies, but the basics motifs are still present. As for the new fare, "Kalt regelt ab die Krankgeburt" is a beautiful number cast in the same mould as that band's 1997-98 era, with a tranquil acoustic intro, beautiful, central depressive melody, surges of aggression, and Kvarforth erupting into various shitfits that truly work within the concept of the band. "Pillerthrillaren" and "Kandierte Verlosung zu Ross" are likewise superb, atmospheric atrocities which cautiously balance the band's razor guitars with delicate Gothic atmospheres and lush inhibitions. "The 11th Hour" opens as delicious, voracious, driving evil black metal in the vein of their early years, but then peters out into crushing doom.

About the only new song I didn't bust a nut over was the opener, "Was irh seid, das waren wir - Was wir sind, das werdet ihr", which opens with gloomy piano and dire blues but picks up into some Hellhammer-like rhythms that did nothing for me, however even here the vocals are pretty good and they eventually break out a captivating, somber melody. But all in all, this is a far more tasteful direction for the band. I've long felt the S.U.i.Z.i.D era marked the band at their peak, so it's reaffirming to hear the band expand upon this material towards the future. I don't feel like we needed another inclusion of "Yesterday I Already Died Today", but otherwise this is well worth the money to any Bethlehem fan wishing to kick the band a few bucks and see them continue as one of Germany's most intriguing dynasties. Once those guitars ring out in "Kalt regelt ab die Krankgebut", you will once more be transported into their wrist-cutting Elysium.