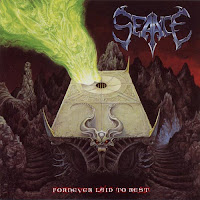 An early reminder that not all Swedish death metal was following in the footpaths of Entombed or Dismember, Fornever Laid to Rest was an exercise in American styled brutality that better resembled the work of Obituary, Suffocation, Death, Morbid Angel, Deicide and also the Canadians Gorguts. For a debut, it's a harrowing, determined effort that staggers past with a huge performance via drummer Micke Petterson (later of Witchery and Satanic Slaughter) and a bevy of of desperate, bouncing and threshing guitar riffs that brutalize the listener courtesy of Patrik Jensen and Tony Kampner, both also in Witchery and Satanic Slaughter, Jensen one of the prime movers of The Haunted.

Seance were not out to alter or refine the perception of death metal, and they don't take any chances here, delivering nine tracks of consistent carnage that benefit from a thick, oppressive and timeless production that still holds up after nearly two decades. For 1992, this could be considered among the more technical acts in the field, with speed licking at the heels of Morbid Angel ("Haunted", "Fornever Laid to Rest") and monolith, swerving grooves that twist and turn on a bloodied dime ("Necronomicon", "Reincarnage"). Perhaps the most impressive element is their ability to mete out a brickhouse battery of sheer force that crushes the witness where he stands, as in the atmospheric instrumental "Wind of Gehenna" or the dynamic blitz craft of "Sin".

Surely this was 'generic' death metal, with no particular characteristic that separates it from the pre-existent array of artists, and even Johan Larsson's focused growls did not stand out, though I love when they throw the trailing reverb on his phrasing. But for some reason, Fornever Laid to Rest has such a solid quality about it that it never grows old or tired. A million riffs race past at varied speeds, and few of them stick, yet the sheer force of their delivery and the undisputed veracity of the performance sends them deeper into the sphere of remembrance than they might otherwise have delved. It's not the most menacing or evil of efforts for its day, but the pervasive darkness and ghastly aesthetic conjurations of Dan Seagrave's cover art make it a minor classic to be cherished by all who pine for an opaque bludgeoning.