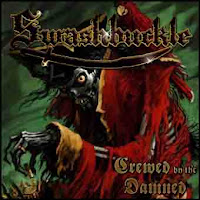 As a massive fanatic of Germany's Running Wild, the first band to become synonymous with the term 'pirate metal', I was rather put off by the new wave of artists using the same historical imagery as a gimmick to push their rather mediocre music. Of course, the two that come to mind are Alestorm and Swashbuckle, both of whom are enjoying a fair level of success these days releasing albums through prominent labels, and touring steadily. But let's be clear about something: the correlations between these artists and the German band they are so likely to draw comparisons towards are purely aesthetic. The music of Swashbuckle, in particular, has almost nothing in common with Rock'n'Rolf's 80s and 90s legacy, nor does the band benefit from the same amazing sense of time and place that Kasparek's wondrous melodic riffing inhabited on brilliant albums like Port Royal and Death or Glory.

Instead, Swashbuckle is exploring their own genuine, historical interest in the subject material, while coincidentally riding a wave of maritime marauder atavism that stems from the Pirates of the Caribbean films starring Johnny Depp, nerdy internet memes (pirates vs. ninja vs. Batman vs. T-rex vs. robots vs. whatever), 'Talk Like a Pirate Day', and other popular culture trends, not to mention the increasing commonality of traditional pirate shanty folk acts at various festivals about the world. So, to reiterate: Swashbuckle is not attempting to mimic or ride upon the sacred coattails of Running Wild, nor do the Germans own some legal claim to the subject matter. The closest thing you'll really encounter here are the lyrics, most of which feel like dumbed down approximations of "Under Jolly Roger", but not even remotely as inspirational as that classic, or others to follow like "Port Royal", "Tortuga Bay", "Lions of the Sea", etc.

No, New Jersey's Swashbuckle play some sadly sub-standard thrash with some clear nods to the 'tough guy' NYHC sect, in particular you can hear a touch of Sick of It All, Killing Time or Madball vocals and riffs in there; all bands who were themselves not averse to tossing in a good thrash rhythm when it suited their momentum. There are about 10 metal tunes on this record, seasoned by folksy little vignettes or narrative pieces that give the album a division similar to the great Nightfall in Middle-Earth by Blind Guardian, only borne of a nautical fancy rather than elves and Sauron. Almost all of the thrash tracks are immensely boring, given more to flatlined riffs and useless leads that at best provoke a brief but forgettable portion of rum swilling melodic death-thrashin' folk metal swagger ("Drink Up", "Jolly Roger"), but usually tend towards some pretty easily forgotten fare like "Welcome Aboard", "X Marks the Spot", or the titular "Crewed by the Damned", which forsakes a few positive Metallica-like charges for uninteresting death grunts and lackluster shouts from the gangplank.

The more atmospheric little guitar ditties like "Under the Black Flag", "Set Sail" and "The Wooden World" certainly summon up nostalgia for the classic pirate period, and I wouldn't be surprised if Swashbuckle wouldn't be a damn good act for a historical festival, but their metal leaves so much to be desired, rather surprising as there are several members of Helcaraxë in the ranks, a band that is an order of magnitude better than this one. Certainly, these thrash pirates created this project to have fun, and the corsair theme reeks of a genuine appeal, but it would be a lot more fun for the rest of us if they actually wrote music worth a damn, rather than placing the burden of enjoyment upon their traditional segues and stage costumes. Crewed by the Damned is a shallow and limited debut which offers no reward outside from its peppered folk partitions and a pretty cool undead sailor gracing its cover, and fails to even fly the skull 'n' crossbones at half-mast.