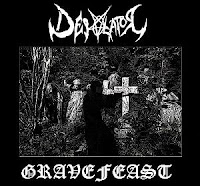 Gravefeast is the initial demo offering of a young Swedish act who perform death metal of the late 80s or early 90s variety, where the riffs are the center of attention, the atmosphere is largely generated in the guitar tone itself, and that's how it lives or dies. You won't hear any massive biting off any one individual band here, but there is the sense that you've heard everything before, only not...exactly. Shades of Entombed, Grave, Obituary, Deicide, Bolt Thrower are certainly experienced within the six tracks, but there's also the sense that Desolator have consciously stripped away any ballast that might have labeled them trendy and decidedly only to exploit the very roots of the genre, coming up with their own ends.

Thus, Gravefeast is not the product of the Left Hand Path bandwagon who have released their countless libations this past decade, and it's also not one of these bands to channel Incantation. No excess guitar tone, and no suffering walls of gloom, just the purest of death metal motives recorded in a din so blatantly honest that I first mistook it for a rehearsal recording. The vocals are the average, blunt gutturals favored for the style, while the riffs never even hinge on the precipice of technicality, woven through a cautious but bludgeoning cycle of chords and tremolo passages. "Gravefeast" itself has a nice thrust between its various guitar lines, and some of the best cemetery soiled vocals on the demo, while "Bludgeonined, Beaten and Berated" also evokes some monstrous grooves and rotten, flesh ripping faster fare. The other track I'll point out would be "Antimortem Autopsy", which succeeds at nearly 7 minutes of the band's festering lack of gimmicks, with some morbid melodies closing it out as it cedes into but one, clean and sad guitar.

There's a sizable chunk of this demo which did little for me, and that would be "Demise of All Life", "Desolated" and "Second Killing of Christ". It's not that the songs aren't consistent with the rest, they have that same bitter atmosphere of unadulterated death, but there just weren't many riffs of note, except perhaps the bridge of "Second Killing". Also, on the whole, the band does suffer somewhat from the honesty of their intentions. Though solid for the style, none of the songs really benefit from interesting compositions that could distinguish Desolator from the hundreds if not thousands of aspiring death metal acts of the 90s underground, not to mention the exponential number out there today. Some refinement and progress will be necessary as the band chisel out their path. That said, Gravefeast is a demo tape, a testing of toes in the waters long structured into an ecology and economy of predators and prey, sharks and lesser fish. The material is functional enough for gigging or the appreciation of old school die hards, and it's not a bad introduction.