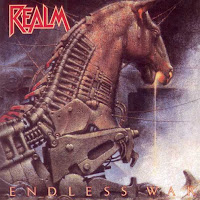 Some bands begin with a whimper, their voices gradually swelling through a number of formative releases into a chorus of brilliance that is beautiful to behold. Others come out firing immediately, with enormous effort, as if their debut were their one chance at breaking out, lancing their signals into the radar-jury of metal fandom with the desperation of starving wolves on the kill, or wild horses attempting not to flee the persistent wrangler, but trample him. Realm were a stampede of wild, wild fucking horses, and their debut Endless War was an explosive, exciting indoctrination into their technical power-thrash prowess that should have catapulted them into the highlights of the late 80s, if only more had been paying attention beyond their damned weekly Headbangers Ball fix...

This album is monstrous for a myriad of reasons, and there were so few comparable bands out there in the late 80s. Sure, you had Watchtower and Toxik, both of which were impressive beyond a doubt, but I must give Endless War the edge over a Control and Resistance or Think This (my personal favorites from these acts, both of which came out the year after this one), because Realm hits like a ballistic missile with intense, dynamic compositions and superb guitar work. At its heart, this is a thrash album which welds together the taut, thundering riff power of Metallica circa 1984-86 to the brash, go for the throat energy of Overkill's first few albums; yet Realm were more melodic and technically gifted than either. Marry King Diamond's bold falsetto's to a take no prisoners, post-apocalyptic bounty hunter and you come up with Mike Antoni's shrill keening, but perhaps the true stars are the incredible guitars of Paul Laganowski and Takis Kinis, and the pounding rhythm section of Steve Post and Mike Olsen that supports them.

Endless War lays into you quickly with the deft, warlike charging rhythms of its title track, triplets being spun into novel formulas as gladiatorial melodies are cast against the ballast of the rhythms, Antoni savage and meaning business as his band careens through their series of ripe dynamics that keep the listener thrashing until the very end. "Slay the Oppressor" lurches into being through a calamity of feedback, bringing the cannons to bear with 30 seconds as it leaps into brilliant, melodic speed, an unforgettable shrieking chorus. I personally love the crafty bridge at around 1:10, where the base riffs take on a flurry of propulsion that mutates into an arching, dominant dual melody that strikes like a mechanical orgasm. "Eminence" maintains the record's almost post-industrial, wasteland atmosphere with a somber, dreamlike ambiance of blowing winds that undergoes metamorphosis into this slower, threatening piece that bristles with a dire mood, killer bass plugging, religious lyrical imagery and non-stop riffing escalation.

With "Fate's Wind", they change up the formula again, with a particular swagger to its curious, crashing rhythm guitars, metered out into a grimy, controlled progressive chaos of clinical grace that makes the listener feel that he or she is on some delightful assembly line, his/her flesh being replaced for robotic efficiency. "Root of Evil" returns to the frenzy of the first two tracks, but not before a spooky intro sequence dominated by Antoni's wailing and infectious, slowly thrashing guitars. The prize winner here is the central thrust into speed at about 1:45, over which the vocals continue to sail with a unique, shining menace. Following this, we're treated to what damn well might be one of the best covers ever included with a metal record, a storming rendition of "Eleanor Rigby" that is both beautiful and unforgettable in its careful abandon. I'm going to be honest, I like this even more than the Beatles original, and some figment of my psyche would like to believe that Paul McCartney heard this at some point, and smiled...

Realm could have left this album off with that, and I would have already been in rapture, but the thrills continue at a mile per second with the hostile and hilarious "This House is Burning", which puts most thrash bands of the 80s to shame with its surging rhythms and the pit fight that is the chorus. "Second Coming" opens with a tranquil clean passage before yet another labyrinth of the band's progressive, distinct melodic exploration, and "All Heads Will Turn to the Hunt" follows suit with manic fist pumping dowsed in slower, writhing grooves. The brief "Mang" gives us a :46 second glimpse into what Realm might have been had they been some premature crossover thrash ejaculate, and "Poisoned Minds" is another barn burner that reinforces the band's prior hyper activities like "Slay the Oppressor", but perhaps the one track here that isn't exactly perfect. The bonus track, "Theseus and the Minotaur" was included with the original CD version, so I feel like it's a true part of the proceedings, and while interesting, it's simply not as savage as all the core material.

Endless War is a wet dream borne into reality, a kinetic debut that should have reaped its weight in praise, such appeal does it hold for the avid tech-thrasher or the power head interested in interesting compositions that twist and tweak the old British formulas into something complex and bewitching. That this was futurism was no accident. The lyrics might have dealt in popular subjects of the day like Cold War and religion, but there is this forward thinking atmosphere to the compositions which would have any sci-fi maven's head out of their rectum and drifting among the clouds. It remains the best of Realm, better than its worthy successor Suiciety, and second only to Act of God as a post-apocalyptic sort of Midwest US thrash masterpiece. It is an album that should be cherished by any true lover of its constituent genres, a blazing effigy of practiced wizardry that loosens the testicles of imagination after blowing its wad far beyond the limited horizons of many of its kin.