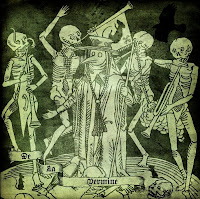 As far as French black metal is concerned, Mourning Forest is performed by the book. One should not expect the frenzied, complex discordance of Deathspell Omega, the lush and sweeping paths of Blut Aus Nord, or the writhing, raunchy plagues of Peste Noire when listening through their sophomore effort De La Vermine, but you can expect something you simply don't hear all that offer in the more melodic practitioners of the genre: a Romantic streak that is manifest largely through the riffing patterns, and it makes a massive difference in the album's effectiveness through its standard, primal blasting passages and mid-paced rocking sequences.

Now, in no way am I implying that De La Vermine is 'happy'. These French are nearly as foul as their neighbors in execution, but there's a welcome glint of somber sobriety. One need not listen beyond the first full-bore offering "Lamentations d'un Pendu" to discover what I mean, as the guitars thread every so slightly left of a course that would consume the track's nearly 8 minutes in tired, complacent ennui, through a fabric of sad wonder like reaching the bottom of your cup and realizing your poison of choice has had no effect on your glum evening. I could draw a comparison to the great Portuguese act Onirik, but in terms of production, the bands are far different, this not being quite so raw. You will encounter this saddening elevation throughout faster tracks such as "A Dead Sun" and "Sombre Charognard", and in pendulous, slower fare like "Cortege Funebre" and "A Travers les Yeux du Vide", the latter one of the most subtly beautiful elements of the album.

Mourning Forest do suffer from a bit of bloat to their compositions. With the exception of the intro and outro, they're all about 6:30-9:00 in length (aside from "Nourrir les Corbeaux"), and some simply do not have the quantity of riffs to survive their durations. Balkor's vocals are hardly unique, giving a thick but effective take on the traditional black metal rasp. The drums feel almost too level in the mix, rarely calling attention to themselves above the guitars or vocals, and the bass is relegated to merely swerving along to assist the listener in noting the shifted fits of sorrow. Still, despite this minor transgressions, De La Vermine does stand out from the mass multitudes performing black metal, if only that the textures they create through the chords offer a wistful sense of abandon and emotion that will slowly add a gray tinge to your environment, suffering you well through its nearly 54 minutes of existence. Perhaps it's only essential to those seeking ill humour and decay in their black metal, but it's ample evidence of burdened minds at play.