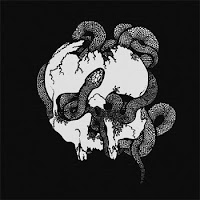 There is something structurally satisfying about the debut from Australia's one man Thrall. The packaging is impressive and minimal. A gleaming, silver skull ridden with serpents gracing the face of the digipak. Thick-lined, mesmeric imagery is interspersed with the lyrics in the booklet, and it's just so black. So very, very black, that before even hearing a note of Tom Void's material, you are already held in fascination of what might await you in these corridors of gloom. Away from the Haunts of Men is ambitious for a first effort, with over an hour of music, but what could have very easily transformed into a dull slog through familiar territory somehow manages to remain potent through its wide diorama of tides and tempos, all of which revel in nihilistic glory.

Void is competent in both matters of transfixed, turgid aggression and stark minimalism, and this range is captured within the first two tracks of the album. "Spit in the Eye", at over 9 minutes, offers a mix of both standard, blasting force and a far more intimate second half that begins with a memorable mid-paced segment and then peters out into an extremely sparse but effective closure. "Frozen Tears and Blood" is not quite so epic in scope, but the faster riffing is superior than the opening track, its pulsing, primal core smeared in savage, ascending melodies like the rise of a murder weapon before the fatal blow. Tracks like "Enormous Night" and the weighty "Black Hearts Burn!" explode with an exciting, rock out pace, and Void even caters towards his specters of dark ambiance with the lovely "To Velvet Blackness", or the droning minimal black/doom of "Ranks Webs". Those expecting the hacking edge of tradition will also be serviced, as "Torrent of Death" and "Heliophobia" both parade through the halls of blasted antiquity, drawing comparisons to early works of Bathory, Burzum and Graveland.

Being 60+ minutes in length, there are bound to be a few less inspired moments, and these do happen in the longer pieces. As hinted, "Spit in the Eye" opens with a fairly bland riff, and "Robe of Flesh" could use some trimming down from its near 12 minutes of existence, but I was impressed by how effective most of this record is, and it's surely an engaging way to 'kill' an hour of your life on this festering ball of mud. The potential is limitless. Thrall is artistic without ever becoming pretentious. Poetic without becoming cryptic. Bleak without the nausea. This debut is depressing without necessarily falling under the 'depressive black metal' sub-genre, but more borne of some empty celebration to the inevitable decay of all, the dissolution of creation into the nexus of nothing from which it once burst forth, a timely entropy that becomes thriving and beautiful despite itself.