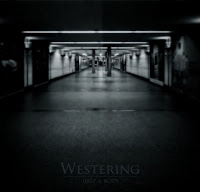 Based on the strength of the opening track alone, I truly thought Westering was onto something with his debut Help a Body. Massive walls of guitar tone greet your imagination with a simple, yet hypnotic fiber, never ceasing to stream into the rear corners of your mind. It's almost like Nadja and The Angelic Process were taken over by an atmospheric black metal guru like Wrest, then given a decidedly darker spin and pitch. At least for the duration of "We Buried Him Preciously", I was in some remote paradise, mentally standing with a first person view of the album's cover art, while wafts of city wind blew down and threw me, disintegrating me through their collective germs and carried ghosts.

Then, a tonal ambient piece known as "Only Forever" breaks up the procession before "My Naked Hands", which sounds...almost exactly the same as "We Buried Him Preciously". Sure, the notes are different here, but their pattern is not nearly so breathtaking, even though the guitars continue to writhe in their melancholic grime. Then, there's another tonal ambient piece in "To Lurch and Fall", which heralds "And Old Confusion", a song even less inspiring than "My Naked Hands." Can you see the pattern of diminishing returns? Well, thankfully the creator, Bryan Thomas, intercepts this downward spiral with "I Soon Will Be Myself Again", which is the best sheer ambient track on the album, and "Gestures in the Dark", though samey sounding next to the other heavy tracks, is at least superior to everything since the opener. Another ambient track follows ("Vestiges"), and the ghastly, shimmering "White Haired", which once again offers only the most subtle variation on the formula.

Thus, Westering very quickly becomes a two trick pony. You've got the pure ambient side, which is for the most part nothing special, and then the sweltering volume and beloved feedback. The latter is by far the more interesting, if only Thomas could configure the notes with such love as he did in the opening track. Now, this album is meant to be a journey, and taken as one single, 40 minute body, you can hardly argue with its consistency, but the journey winds down all too quickly, the promise and beauty of the first six minutes soon mangled by repetition and filler. I adore the tones Thomas creates, and his minimalist approach is one I can certainly stand behind, but sometimes I require more than just sound itself to gauge my interest, and this project would benefit enormously from some more careful writing, and perhaps by merging the predictable ambient tracks into the larger, metallic discourse.

Ja, I thought this was going to be the skit on my initial sampling, but lost interest almost immediately. Next time!