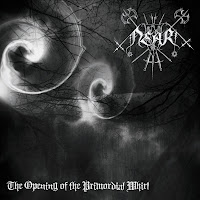 Italy continues to develop one of the more promising black metal scenes in the underworld, several bands of which feature the talents of drummer Vidharr (Tenebrae in Perpetuum, Chelmno, Beatrìk). Thus, when I peruse the lineup of Near, I am not surprised to see his name here, joined by bassist Ferghus (also Chelmno) and vocalist/guitarist F. Polninus, who has also been scuttling about the underground for several years. The Opening of the Primordial Whirl is the full-length debut of the band, but they've been in operation since 2002, with a few splits and a demo comp to their credit.

I'm not entirely convinced that this will be the record to put the band on the maps of many, but nonetheless it's a worthy effort capable of conjuring a surreal, mist-filled landscape which will entertain any purist grown tired of the same, nullified chord progressions. There's nothing necessarily unique about the means by which Near handle their business, but there is an elegant subtlety at work that is clearly processed through the tranquil, vein emptying "Ventrar", harrowing darkness of "Human Illusion", and predatory "Old Wolf", plus the delicious, sorrowful chord streams "The Dead Side of Human Nature". F. Polninus has an expectant rasp which thunders across the dimly lit horizons of the album's moonscape, and Vidharr makes the undercurrent of blasting planetary succession seem effortless, while the bass and guitar riffs offer just enough swerving delight that the conscience remains engaged, longing, and set adrift upon the band's dark tides.

The Opening of the Primordial Whirl does suffer from a mild case of sounding like any of a few thousand other underground black metal records, due largely to the lifeless and flat production, but this is not enough to harm the compositional skill of the trio, and they've got a penchant for tasteful melancholic licks that rarely disappoint. Few of the tracks wear out their welcome, and it's clear some thought and creativity went into the lyrics and titles, and the lull of atmosphere created through the riffs. There's not a huge difference from Chelmno, but the sound of Near is not so raw, tactile or scarring as Tenebrae in Perpetuum or Beatrìk. Those seeking out black metal with pure, downtrodden aesthetics but a balanced dynamic ability would do well in giving this record a listen, because there is at the least a fine attention to detail, a potential at play.