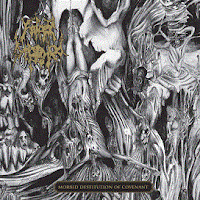 Father Befouled is another of the many bands in recent years who have devoted themselves to reaching straight back to the 90s, tearing out the essence of Incantation's charnel, atmospheric aesthetics, and bringing the style forward to a new era in which it poises as a fine counterbalance to the technical excess that has driven the genre far beyond the reach of many of its originators. Granted, they're better at this than most of their peers, and that's because they seem to take it quite seriously, as opposed to a joke or 'the thing to do' by broaching some bandwagon.

Father Befouled's members come from an interesting pool of sources. You've got Ghoat of USBM act Hills of Sefiroth on vocals and guitars, joined by his band mate Wayne Sarantopoulous from Festered and Encoffination on drums, whom you might recognize as 'Elektrokutioner', he of about 400 bands, almost single-handedly attempting to resurrect the primacy of early death metal into a modern empire. They're joined by an enigmatic guitarist 'Ghoul', and bassist J. Kohn of raw black shredders Prosanctus Inferi and Black Funeral. An eclectic range of experience here, but you can rest assured that all participants are committed to the vile pallor of authentic sound, the raw and cavernous pedigree required to make an album like Morbid Destitution of Covenant function. And it does.

Take for instance, the brief track "As Reverence Descends", really just an intro to "Paradise of Desecrated Nothingness", but astoundingly poignant as its doom-driven chords groan out across the ringing feedback at the climax. "Paradise..." itself continues to let the feedback soar, while a disgusting bitch of a slugging riff begins to stagger out into a morbid metroplex of wrenching horror. "His Divine Pestilence" is another horrid drudge, but the band does not merely play slow; they can thunder over you like an unholy approximation of Bolt Thrower and Incantation in "Testament of Unholy Essence", "Christless Mass" and "Sulfurous Majesty Above Man", and the Morbid Destitution of Covenant ultimately becomes a strident, dynamic sophomore that cements Father Befouled as one of the band's to be reckoned with in this movement.

Usually, the albums in these gentlemen participate are rough sounding at best, but I was taken aback at just how clean the mix here is. Almost all the atmosphere is delivered straight through the ruptured attendance of the guttural vocals, and the bludgeoning resonance of the guitar lines. You won't find funeral keys or other tricks infesting the songs to provide the underworld aesthetics, these are conjured directly through the death metal, and in this way the band truly succeeds as a direct medium to their idols. Father Befouled don't exactly create memorable riffing fare, but that's generally not the point of an album like this. It beats you down through the graveyard dirt to the catacombs belief, and sacrifices you upon a forgotten altar, a cure for sunshine, rainbows and ponies.