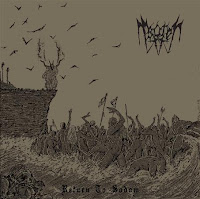 It's amazing what one can often encounter completely at random, and in the case of Israel's diabolic duo Tsorer, this would be the case, for I had never before heard of this band or any mention of them in any forum or format until I was referencing them through another project of vocalist/guitarist Heller, the disgusting black thrash hybrid Hell Darkness, who were lauded by Fenriz over at the Darkthrone as a part of his recommendation series. I admit I didn't get a lot out of that project, but when I tracked down Tsorer, I was knocked over by just how easy and practically perfect this debut offering was (through Black Hate productions).

When I begin the auditory journey through a traditional black metal album, this is pretty much exactly what I want to hear. Simple, catchy as fuck guitar rhythms that service all of the usual suspects (Hellhammer, Burzum, Mayhem, Darkthrone, Bathory, etc), harsh vocals and an incredibly evil atmosphere. Through the notation and pacing, I want to be terrified at the images evoked, regardless of how familiar the actual style may seem, and I feel these two pull that off in spades. Tsorer also incorporate keys to create this magnificent, raw, subtle symphonic effect, never once distracting from their abysmal, rocking core, and Return to Sodom leads off with a trio of stunning, mid paced works in "Misanthrope", "Sodom" and "Again", each of which reaffirms exactly what I so loved about early 90s Darkthrone, or the much earlier catalog of Celtic Frost.

At this point, the album slows to even more sodden vortices of menace like "Gifts" and "Old", the minimalist song titles serving as poignant, almost mocking statements of how much this band can kick your ass with so little. The latter, "Old" includes jilted, chaotic pianos and swells of melodic noise that fit fluidly over the crashing power chords, and it stuns me that you'll hear almost no tremolo picking on the entire fucking album! Just huge, simple streams of chords delivered with uncaring arrogance! Not surprisingly, the rest of the album remains consistent in quality, with the darker pauses of "Penetration Skills" or "End", and the crushing, demented fuzz of "Messiah" staking their ground on the psyche, often so dowsed in the atmosphere of the keys that they take on otherworldly, almost ethereal doom characteristics.

Return to Sodom is flat out one of the best of the pure strain black metal albums I've heard recently, standing alongside the latest Sargeist and Maniac Butcher efforts as a fully functional scratch of the ancient, church burning itch. If you're seeking some progressive spin on this genre, then you'll most assuredly need to seek it elsewhere, because Tsorer create nothing but raw, brutal libations to epochs of the past, when it was never a question of how MANY chords you wrought, but HOW you wrought those chords, how you placed them into a nexus of memorable malice. There's nothing impressive about their musicianship, and next to no noted innovation. They're just that convincing...and this is only the debut.