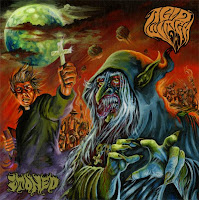 Acid Witch are clearly onto something with their mix of classic horror and stoner aesthetics, beautifully realized and corny album covers, and downtrodden death/doom inspired by the legends of the 70s, 80s, and 90s. Indeed, they produce the sort of works that one looks at and instantly associates with 'cool'. But the music itself, while clearly sniffing heretics down the right track, has yet to truly grip me. Witchtanic Hellucinations was a fun debut, showing sincere promise, but it left no lasting impression save to remember the band's name and uncanny visual knacks. The Witch House EP built upon this, with a few of their better songs, but the more recent Midnight Mass EP wasn't quite as good, and I was afraid we might encounter some pre-mature stagnation.

Well, the bruising sophomore Stoned proves that this is not the case, as it's the most coherent and musically satisfying offering the band have released to date. Sort of a poor man's Hooded Menace (not that much of a coincidence, as Lasse was once involved here), or a less depressing Electric Wizard, they riff through silly and classic horror concepts with real enthusiasm, taking subjects like Halloween rituals and dope smoking and writing up some decent lyrics to complement the music. They're not your average death/doom band, because they sauce up the metallic meat with a stoner rock influence, manifest through organs that feel like they belong to a Coven or Black Widow record, and it is this generational clash that helps them stand out from the faceless masses of dull funeral parlor death that have nothing stirring in their cauldrons.

"Satanic Faith" is a synthesizer intro piece which uses similar sampling to the intro of their Midnight Mass EP, but this time it pays off when the sludgy mono chords of the amusingly titled "Witchfynder Finder" erupt into big, simple chords that immediately transported me back to Monster Magnet's Superjudge, etc, but with the added advantage of the death barks. This is not the most powerful pick of the litter, an honor that I should instead bestow upon the carnal crush of "Live Forever", morose "Stoned to the Grave", or the balls out wrecking of "If Hell Exists". Rounding out the metal mass are pieces like the creepy, beautiful horror interlude "Whispers in the Dark" or the sample heavy groove bottomed "Thundering Hooves". Even the poorly titled "Metal Movie Marijuana Massacre Meltdown" has some heft to it (points for name dropping Lizzy Borden and Fastway), and the epic finale "Sabbath of the Undead" is likewise satisfactory.

But for all its improvements to the formula, better production, and so forth, Stoned does still lack in one particular space. The riffs here all fit the band's m.o.: huge, bludgeoning aspirations to the psyche. Unfortunately, they're really just not that great. Never once will you find a surprise lurking in any of the compositions. At best, the band will pull off a lead or organ sequence that conditions you to their overarching, ghoulish experience, but they just don't seem capable of writing a riff that will simmer your brain for long after the music dies. They're not boring, and they're not 'bad', but they seem redundant and familiar to the decades of doom metal we've already experienced. Without the atmospherics, they'd likely fall flat. Stoned, however, drowns itself in atmosphere, like an ungodly hybrid of Bongzilla, Cathedral and Runemagick, so as a whole, it delivers more entertainment than any of their prior releases, and comes the closest yet to honoring the band's visual spin with music of equal quality.