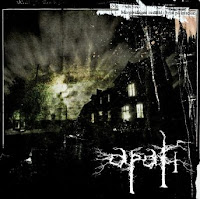 Several of my acquaintances are quite enamored of the recent swing in depressive black metal towards the borders of the shoegaze or indie rock scenes, some artists putting both feet firmly across such distinctions. So, as you can guess, my failure to crease at the knees to the sounds of Agalloch (they're okay), Wolves in the Throne Room (meh) and Alcest (har har) do not make me particularly popular at parties. You might call some of these people hipsters. You might call me one. I might say the same of you. They might just say I was old. At the end of the evening, we're all deep in our cups and thoughts, the dust clears, and 80s Iron Maiden marathons still rule, and that's really all that is important to this old boy...

That said, Lifelover is a band we usually do come to agreeable terms on, and this other Swedish band, Apati, had a debut that was a fairly close approximation to that steady, melodic driving, sound that reeks more of a new spin on mid period Katatonia than anything else. That album, Eufori, was rather divisive, as some seemed only to happy to have another band in that vein, while others were offended at its closeness (and to be fair, it was pretty fucking close, almost like a tribute). Personally, I have taken to that album, because despite the obvious level of derivation, it's actually very catchy, and I still spin such lush tracks as "Höst", "Livet Ur en Dåres Synvinkel" and "Sömnlösa Nätter" in a normal rotation. When it comes down to the line, the music is all that matters to me, and Apati are clearly quite good at writing songs of this nature, falling behind only Coldword, Lifelover and the more turbulent Shining.

So I was a little surprised that the band's sophomore outing, Morgondagen inställd i brist på intresse, is such a different beast than its predecessor. The doomed, glinting overtones persist within their sound, but there is a far more stringent focus on cleaner guitars and spoken word tones that drift across the fresh drum sounds (Patient C is the brainchild of another Swedish band you might know, Svart). In fact, though I hate to admit it, this album is clearly migrating away from the Lifelover influence towards something more along the lines of that French artist that I strive to hard to ignore: Alcest. Or more accurately, they've implemented those same college rock, indie rock and shoegaze influences that are so ardently forgotten as the trendily attuned line up to give Neige a smooth kiss on his fey-blessed buttocks. Call the chief of police, alert the fire department, cancel your vacation, and run for cover...a Swedish Alcest? I am so doomed, aren't I?

Surprise number two: Apati are pretty good at this, pretty good indeed. I like their take on this style quite a lot more, and it's not always so similar. A little less saccharine, a little more stoked up on drugs and the bitter taste of irony. Morgondagen inställd i brist på intresse is packaged like a dark trip, with random suburban imagery cast in grays and blacks and whites and pixelated mystery, lyrics provided (in Swedish) like cut out clippings of newsprint, and right smack dab in the middle of the digipak's booklet, a collection of drugs, both prescription and otherwise, headlined by the newsprint clip of 'Ctrl+Z', which also happens to be track #6 here, a dreamy, pop-inflected ambient piece with spoken word that helps channel the dark, urban absurdism that populates the disc. The band does occasionally engage in the tortured vocal stylings of their debut, as in "I Förträngda Minnens Sällskap" and the excellent, acoustic thundering of "Total Avsaknad Utav Glädje" that undoubtedly draws the mind back to their Lifelover comparisons. To balance these, you've got the calm unease of "Kemisk Kärlek", "Lämna Mig Ifred", and The Cure-like dopiness of "Allt är Aig Likt" to comfort you.

Morgondagen inställd i brist på intresse is an unusual album, to be sure, but it's also intriguing. Bright enough not to be a letdown, but not good enough to have a greater impact on me than Eufori, as I preferred that heavier approach to such surrealistic folly (though I cross my fingers that the follow-up to Konkurs will sate me). If you're not put off by the fact that Apati will undoubtedly bear a similarity to your other favorite bands, you might indeed contract some enjoyment from this. It's well written, engaging and somewhat diverse. This is perfect, and it is NOT a metal album, unless you count the faint few bars of distorted guitar rilling off into the bridge or climax of particular tracks, and it should not be judged as such, but perhaps there is something to it that will sate both the hipster and bitter pill in all of us.