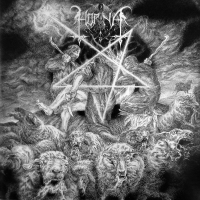 Horna have always delighted in creating a large body of work with which to support their career. This generally manifests through a series of full-lengths and a myriad of split releases, but often the band will go so far as to collect some unreleased tracks or alternate recordings and also offer these to their fan base. These are hardly offensive, but largely ineffectual, like last year's Musta Kaipuu that was released through Debermur Morti and later Moribund. In the case of Kun Synkkä Ikuisuus Avautuu, we're not hearing anything novel per se, but a collection of demo tracks, some of which ended up on the 2001 album Sudentaival or the Ordo Regnum Sathanas collections that were also issued earlier in the band's existence. This particular compilation was originally released in 2006, but Frostscald/Silenced Voices have repackaged it with vastly better artwork (easily among the best of Horna's catalog) and made it more available once more to your perusal.

Taking into consideration that Horna's full-length studio fare is already extremely roughshod in the production department (intentionally), this demo material is scathing and entirely unkempt. At the best, it feels like a barbarous rehearsal tracking or some poor tape recording of a live performance, but this should not stop the stalwart and masochistic attache who devours the cult and desires to hear this style of black metal in its native environment. The overall tones and wind and weave like a charnel house procession, while the vocals feel garbled, with very little chance of making out anything but their syllabic pestilence as percussion atop the fuzz of the guitars and clanging drums. From the Sudentaival sessions, Horna have included the title track, "Skaldiriimu", "Vihasta ja Arvista", "Hautajaisyö", "Talventuoja", and "Kun Synkkä Ikuisuus Avautuu" itself, all of which spit frost and death with atonal, stark majesty through simple and splattering compositions, "Vihasta..." my favorite for its creeping bass-led bridge rhythm. "Korpin Hetki", "Ihmisviha", and "Ordo Regnum Sathanas" are also included from the original Woodcut re-issue of the band's debut, but stylistically they do not diverge from Sudentaival.

This release is obviously targeted towards the collector who has a vested interested in the primacy of its recordings, even when faced with their superior studio incarnations, and to that extent, Frostscald has done a great job making it look better than it probably deserves. Everything from the cover image to Shatraug's note on the back panel is striking. I myself am a pretty huge Horna fan, so I was personally interested to hear these rough and sore takes on the Sudentaival material, though I can't say I fancy them by comparison to their 'official' revisions. If you're just getting into the band, then absolutely start elsewhere: Haudankylmydden Mailla, Envaatnags Eflos Solf Esgantaavne, or the superb Sotahuuto are all worthy points of entry. For the starved consumer of all the band's output, this is but a glimpse at the aural chaos of origin, neither fascinating nor accessible, which makes fair eye candy among the larger host of releases.